The Town Council resolved today to challenge any attempt by the NT Government to compulsorily acquire Anzac Oval.

In response, Minister Dale Wakefield has reiterated yesterday’s threat as a clear intention: “The Town Council is not willing to negotiate, so we will acquire the land,” she told the Alice Springs News.

Council’s resolution followed more than an hour’s debate at today’s special meeting, called after Minister Wakefield (Territory Families) told the ABC the government will move to compulsory acquisition within the next few weeks.

The vote in support of the resolution was unanimous. Mayor Damien Ryan and Councillor Glen Auricht were apologies. The meeting was chaired by Deputy Mayor Matt Paterson.

Last December the council asked the NT Government to provide evidence of Traditional Owner support for their plans to build an Aboriginal art gallery in the Anzac Precinct. Its support for the gallery at location was conditional upon this evidence.

It has never been provided.

The closest Minister Dale Wakefield has come was in a letter dated 9 March 2020, which referred to a meeting of 32 Traditional Owners who “strongly endorsed” the project.

That meeting took place in December 2018.

The letter talked otherwise about “many approaches” in support, with voices “getting stronger” over the past year.

It acknowledged the dissenting voices of some Traditional Owners and contended that the government “values them”, while in the next sentence saying, “we cannot allow a few loud voices to drown out the needs of our community and the economic future of our young people”.

The News asked the Minister for an explanation.

In reply she essentially reiterated the 9 March letter.

“Many Traditional Owners have told us that the Gallery and this site have their support.  They see it as critical to a better future for future generations.  There are others who do not agree. We will continue to have these conversations but we are not expecting 100% consensus.”

Councillors at their mid-April meeting said the government had also not answered the general community’s questions about a design – how much of the oval’s green space does it need? – and about where rugby will go.

This was reported in these pages at the time.

Unfortunately, in the pressurised environment of the pandemic response, the letter from CEO Robert Jennings putting this as a specific request to the Minister (and reiterating the request for evidence of Traditional Owner support) was only sent yesterday, councillors were told today.

It was also noted in today’s meeting that Mr Jennings’s fortnightly meetings with the government’s representative, Clifford Weeks, to progress this and other issues had been suspended by the government in response to the pandemic.

Mr Jennings, however, said the meetings had been largely about the Kwatja water-play park.

The News asked the Minister to explain why council has not been provided with a concept drawing or preliminary plans. After all, it’s their asset and if the concern is really to make progress, why not maximise the information flow?

Well, there are no design concepts, despite the 9 March letter’s clear reference to “plans” for the “iconic building” that may extend “somewhat” onto the existing oval and would require an access road and room for large vehicles to turn around (the implication being that these would also intrude into the oval). It talks otherwise in general terms about green space and infrastructure such as a stage, while noting that the oval’s community space at present is behind “a locked wire fence”. 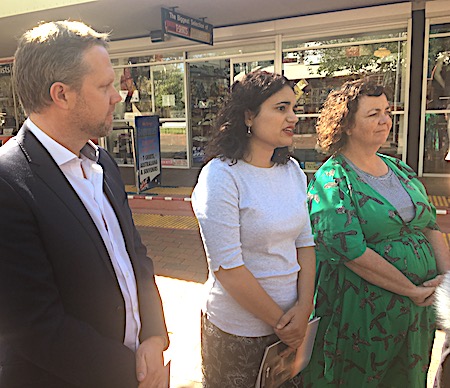 The letter of 8 April, jointly signed by Minister Wakefield and Minister Lauren Moss (Tourism and Culture) does not enter into these issues at all. It asks council to “work with us”, by endorsing the Anzac Precinct as the site for the gallery, including Anzac Oval.

Left: The Ministers in September 2018 with Dr Mark Crees. The project has scarcely budged since.

It adds nothing new other than to now hitch the project to the pandemic recovery (previously the focus has been on revitalisation of the CBD).

“The Gallery will bring back the airlines,” Minister Wakefield told the News. “It will bring back visitors to our town.  It will give a huge boost to our economic rebound.  I will not let this opportunity slip through our fingers.”

The 8 April letter was apparently the “absolutely last ditch attempt” the Ministers would make to work with council, she told the ABC’s Stewart Brash yesterday.

The government will now “absolutely pull the trigger within the next few weeks” on compulsory acquisition, she said, so “tourism businesses can plan for their future knowing the Aboriginal art gallery is going to be part of it”.

The previous sweeteners on offer to the Town Council (such as a new library) are off the table. All that they would get under this “legal process” is the value of the land as determined by the valuer-general.

So you are “prepared to go to war” in the lead-up to an election, put Mr Brash.

“We need this project for Alice Springs,” said Minister Wakefield.

In a statement to the News today, she said: “The Town Council is not willing to negotiate, so we will acquire the land. One owner means one consultation point.  We can drive the result that Alice Springs desperately needs.

“Alice Springs just wants us to get on with the project and we will get this done.”

The council’s legal advice on the issues of compulsory acquisition, from its own solicitor, was before councillors today “under separate seal”, which meant it could not be part of the discussion.

It was provided “under legal privilege”, said Mr Jennings and as a result would remain confidential.

Cr Melky, who had familiarised himself with the Land Acquisitions Act, noted that it strongly advises that agreement be reached between the parties.

It also provides for an objection and appeals processes, compensation and so on. It would all take “a very long time”.

As well, he pointed out that council did not have before them a “formal request” from the Minister.

Cr Jimmy Cocking also noted that neither of the letters refer to compulsory acquisition. He said the public comments being made, including by the Chief Minister, make it very difficult for “a working relationship” to be established.

The government’s process had been “challenging” and “divisive” right from the start, he said.

The government has always insisted it is their project, but it needs to be an Alice Springs and Central Australian project on a national scale. If it proceeds under duress, it wont deliver inter-generational benefit for all of the community, and particularly for Arrernte people

“Megaphone diplomacy” is not the way to do it, said Cr Cocking.

He said the oval means a lot to him personally, especially in relation to experiences he shared there with his father.

He said he would not approve ceding it without a concept drawing of what the government intends to do with the green space and without the community being fully consulted.

Cr Jacinta Price said at each turn in the government’s public comments they have made council out to be the problem, when council have not been provided with a solid proposal.

She was happy to continue with council’s present position.

Cr Marli Banks, who had called the meeting, expressed her disappointment that the Minister would use “such aggressive tactics in midst of a pandemic”.

“This is not how the NT Government should be dealign with their local council,” she said.

She was seeking a “simple” and “really clear” response from council to the Minister’s on air threats, and that is what she got with their final resolution.

Meanwhile Minister Moss is tidying up loose ends, making a statement today on her decision not to permanently declare Anzac Oval as a heritage place:

“I accept that Anzac Oval has a degree of heritage significance, for the reasons described in the Statement of Heritage Value submitted to me by the Heritage Council.

“I also accept that its significance can at least partly be attributed to its changing use over time, as a public space linked to the social and cultural needs of the community.

“The owner of the land, Alice Springs Town Council, does not support the permanent declaration of Anzac Oval as a heritage place and it is my view that the site can continue to be available to serve the social and cultural needs of the community and reflect the cultural and environmental values of the area.”

Rolfe trial would not be the ‘first’ that is widely contended