As the world contemplates with trepidation a second wave of COVID-19 Michael Gunner (pictured) had this message: “The beers are here and the jobs are back – a keg convoy is rolling up the Stuart Highway, 175,000 litres of the good stuff.”

Wearing a high-vis vest and standing in a Darwin alcohol depot the Chief Minister was giving his government’s daily COVID-19 update, with an opening fit for Donald Trump.

Mr Gunner referred to the role Aboriginal organisations have in the management of the pandemic but has not provided answers to questions put to him on this subject.

Communication clearly isn’t Labor’s strong point: Health Minister Natasha Fyles (below left) today wrote to all Members of Parliament that “the proper protocols in place when seeking information from the Health Department [is to] contact my office rather than directly contacting public servants. 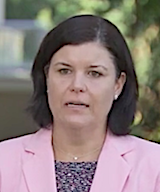 “My office is turning queries and questions around as fast as possible.”

Independent Member for Stuart Scott McConnell has no doubt that will happen: Ms Fyles’s minders will quickly turn facts into political spin.

Mr McConnell says he will not be “stopped from doing my job” and he will continue to obtain information from whomever he pleases, as an MLA and a citizen.

Meanwhile the Member of the adjoining electorate, Chansey Paech, says the people of Namatjira have mixed views about the biosecurity regions: Some support them, some want them to continue past their current June 18 deadline, some say they should never have been introduced.

Mr Paech (at right) describes the state borders in his electorate – to the south and the west – as “very porous”.

The fact that the NT has only one Coronavirus case for every 7308 people, compared to the nation’s one for every 3600, may well be good luck but Mr Gunner’s passes it off as good management – mostly his, while the measures are pretty well what’s being done all around the nation.

The Territory would also no doubt benefit from its small sparsely spread population and the long distances separating it from the centres of the outbreak.

Mr McConnell says “to hell with keeping the public informed to keep the public goodwill” seems to be the government’s MO.

He claims that as the lifting of the biosecurity areas is approaching on June 18 there is a case for examining the rules in place, especially given the absence of community transmission.

His constituents are in favour of secure NT borders and put up with the biosecurity divisions but – given the figures – now questions why places such as St Teresa and Hermannsburg should remain isolated.

There has been “no practical reason” why the West MacDonnells national park should be off-limits – except that they are not in Mr Gunner’s back yard.

Mr Gunner fails to provide a “nuanced response” to The Centre’s problems, and provides no answer to concerns over the impact of the likely departure of 103 Federal police officers, says Mr McConnell.

Instead of measures affecting all of the population the NT should be made ready for any localised outbreaks.

During his media conference on May 7 Mr Gunner spoke about border security, asserting that the NT’s is strong.

He did not trust SA to guarantee its border security with Victoria, and neither Queensland with NSW.

All three state borders will be opened at the same time and the move will be last in the COVID measures to be lifted, said Mr Gunner: “Significant caution on that: We’ve got to make sure people in remote communities … the land councils, APONT and AMSANT and others are in the driver’s seat when it comes to this.

“There are parts of the Northern Territory, bits near the Kimberley … they might be a worry … because we’ve had that outbreak in the Kimberley … We’ve got to do this in the right way … be extremely careful how we manage this … the borders is what allows us to act fast on how we bring back to jobs in the NT.

“We’ve got to be extremely cautious with what we do around the borders.”

How many “bush roads” are there leading into the southern half of the NT from SA, WA and Queensland?

How many police and army personnel, respectively, are deployed to control any movements on those bush roads, and on the Stuart Highway, Plenty Highway, Sandower Highway, Docker River Road, Kiwirrkurra Road and Tanami Highway?

Where are they deployed?

We will provide the answers when and if we receive them from Mr Gunner.