There are no silver linings to a deadly pandemic, but it’s clear the earth has benefited from the human population’s restricted movement and economic activity.

Global carbon dioxide emissions are expected to drop by nearly six per cent this year due to COVID-19, according to the Center for International Climate Research and other climate researchers. It would be the largest year-over-year decline since the Second World War.

With fewer cars on the road and some factories closed, air pollution has been reduced around the world, from Los Angeles to New Delhi. Jellyfish have been spotted in Venice’s suddenly clear canals.

In Canada’s five largest cities, air pollution dropped by as much as 15 per cent in the second half of March, according to an analysis of provincial data by the Canadian Centre for Policy Alternatives. Traffic volumes in Toronto, meanwhile, have been cut in half.

This is all temporary, of course. When lockdown measures are lifted, CO2 emissions will resume their pre-pandemic levels and the smog will return.

But climate scientists and activists hope this moment can be a turning point, when our efforts to combat one global crisis inspire action against another, and governments use their unprecedented spending on economic recovery to accelerate a transition away from fossil fuels and toward a green economy.

The federal government won’t have another opportunity to make the necessary investments to meet its climate goals, said Robin Edger, executive director and CEO of the Canadian Association of Physicians for the Environment.

“After this the cupboards are bare,” he said. “If we try to spend all this money on getting back to the past, I think they’ve kind of blown it in terms of decarbonizing the economy.”

Under the Paris Agreement, Canada has committed to reducing its greenhouse gas emissions by 30 per cent below 2005 levels by 2030 and is targeting net-zero emissions by 2050.

Even before the pandemic it was going to take a massive investment and radical change to meet these targets, Edger said. “We were already talking about a public mobilization along the lines of nothing we’d seen since the Second World War. So now we’ve had this economic collapse as a result of a health crisis and the government has a choice to make: Are we going to make investments in line with our country’s stated climate goals and set ourselves up for the future, or are we going to try to cling to the past and pour money into shovel-ready but unsustainable projects?”

Meanwhile, there is competing pressure to revive the economy as quickly as possible, suggesting investments in climate-change mitigation are luxuries we can’t afford given the dire economic situation. Canada’s oil and gas producers, already dealing with collapsing demand and record-low prices, are calling on the federal government to freeze the carbon tax and delay new climate-change regulations or risk losing the industry and thousands of jobs.

United Nations Secretary-General Antonio Guterres used the occasion of Earth Day earlier this week to draw a parallel between the global efforts to fight COVID-19 and climate change, calling the climate crisis an “even deeper emergency” and urging governments to target their economic recoveries toward a more sustainable future. “The current crisis is an unprecedented wake-up call,” he said. “We need to turn the recovery into a real opportunity to do things right for the future.”

The federal government seems to be adopting that approach, given its decision last week to spend $1.7 billion to clean up orphaned oil and gas wells in Alberta, Saskatchewan and B.C., which will provide an estimated 5,200 jobs for laid-off workers. It also announced $750 million in aid to help fossil-fuel companies reduce methane emissions. Prime Minister Justin Trudeau has so far resisted a direct bailout to oil and gas companies.

The government initially focused its financial aid on emergency relief, but the oil well cleanups are an example of combining job creation with longer-term policy goals, said Michael Burt, executive director of the Conference Board of Canada. “The shift in thinking from short-term crisis management to recovery is an important one.”

But if the government wants to see a permanent drop in emissions, Burt said, there has to be a permanent change in how we produce and consume energy. “Without those fundamental changes this will be a temporary phenomenon for sure.”

Even if the estimated six per cent drop in emissions due to the pandemic was somehow sustained, it still wouldn’t be enough to limit global warming to less than 1.5C above pre-industrial averages, as called for in the Paris Agreement. Global emissions would need to fall by 7.6 per cent every year for a decade to meet that target, according to the United Nations Environment Programme.

So dramatic change is required, and some experts think reframing climate change as a public health threat might help capitalize on the collectivist mindset of this current moment.

Never miss the latest news from the Star, including up-to-date coronavirus coverage, with our free email newsletters

“Climate change isn’t about saving the environment,” said Miriam Diamond, a professor at the University of Toronto’s Department of Earth Sciences. “It’s about saving society.”

Diamond said she has been impressed with the “willingness” of Canadians to absorb and adopt information provided by public health experts. “The experts have prepped us as a population and we’ve risen to the challenge,” she said. “We can do the same thing with respect to climate change.”

As with combating COVID-19, fighting climate change requires us to accept that taking action today will have an impact in the future, she said. “But it’s an act of faith, and that act of faith is given to us by experts.”

Diamond said she is not necessarily optimistic this will be a turning point because governments around the world are “champing at the bit to get their economies going,” and that rush to return will mean bailouts for conventional industries that can put people back to work quickly. Diamond said that while she was happy the Canadian government didn’t simply bail out fossil-fuel companies, she said she wished the money was spent on innovation to change the country’s energy mix rather than simply cleanup. “Now is the time to press the reset button,” she said. As a city, Toronto met its 2020 target of reducing emissions by 30 per cent from 1990 levels and is on track to meet its 2030 target of a 65-per-cent reduction, according to the city’s latest greenhouse gas emissions inventory.

But the pandemic is also draining the city’s coffers and could cost $1.5 billion, according to an estimate released this week. That could limit its ability to invest in climate-change mitigation. Municipalities, unlike other levels of government, have fewer financial levers to pull and can’t go into debt.

That’s why cities like Toronto should be “in the ear of the federal government right now,” Edger said. “They should be arguing for the kinds of sustainable projects that will help you juice your economy and get money flowing and bring jobs to your region while creating more sustainable cities.”

Edgar said cities should be lobbying the federal government to invest in public transit and cycling infrastructure, building retrofits to reduce waste heat and electric-vehicle charging stations. He added that governments should consider whether a project is not simply “shovel ready” but “shovel worthy.”

So any investments in transportation should be aimed at supporting electric vehicles or getting people out of their cars altogether. By 2050, the city wants three-quarters of all trips under five kilometres to be walked or cycled, and all vehicles to use low-carbon energy.

What remains to be seen is how other factors may influence emissions in the post-pandemic world. Will people be more reluctant to take public transit? Will cheap gas encourage more people to drive? Or perhaps a more permanent shift to working from home will lead to fewer people commuting altogether.

“It’s hard to say whether all of these things will net-out positive or negative,” said Burt, of the Conference Board. “There are a lot of things that could add to or take away from emissions in the coming months and years as a result of the fallout of COVID-19.” 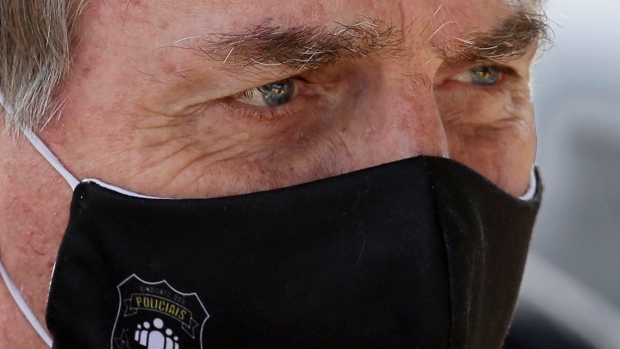 Brazil’s Bolsonaro says he will be tested for COVID-19