Scientists in Italy are investigating the appearance of pink glacial ice in the Alps, which they suspect is caused by algae compounding the effects of climate change.

Observers noticed the unusual hue at in the Presena glacier in the far northern Italian region of Sondrio.

Biagio di Mauro, a scientist at Italy’s National Research Council, said the colour is likely caused by Ancylonema nordenskioeldii, a type of algae commonly found in Greenland’s so-called Dark Zone, where the ice is also melting.

“The algae is not dangerous,” di Mauro said. “It’s a natural phenomenon that occurs during the spring and summer periods in the middle latitudes, but also at the Poles.”

Ice normally reflects more than 80 percent of the sun’s radiation back into the atmosphere, but as algae appears, it can darken the ice so that it absorbs the heat and melts more quickly.

Algae at very low temperatures would normally die, but if the ice gets even very slightly warmer it can lead to a thin layer of water that allows it to survive and propagate, thus accelerating the melting.

“These algae need water. So of course, if your temperatures rise and there’s more melting on the glaciers, more water available, they will thrive,” said Harry Zekollari, a glaciologist at Delft University of Technology in The Netherlands.

“With more sun absorbed, you will have more melt more water and potentially more algae. And with this, you can have in fact a positive feedback loop which can lead to a lot of loss of these glaciers, which are already in a dangerous state.”

In this case, the pink hue appeared at Passo Gavia at an altitude of 2,618 metres.

“Here we’re trying to quantify the effect of other phenomena, besides the human one, on the overheating of the Earth,” di Mauro said.

“There are more natural phenomena, such as algae, but we can also link melting with the presence of humans at these altitudes, with the ski lifts and hiking.” 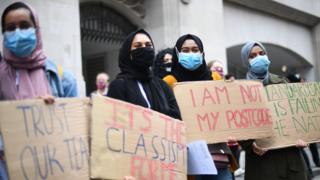