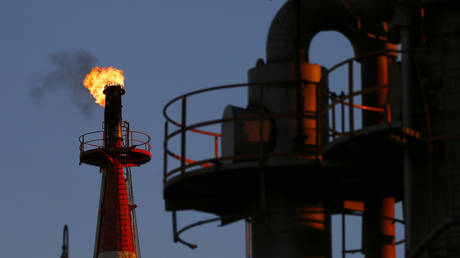 Brent crude oil has extended its price plunge, falling to just below $17 per barrel, a level not seen in nearly 20 years. The decline comes as WTI crude slowly recovers after sinking into negative territory earlier this week.

Brent plummeted to as low as $16.76 per barrel early on Wednesday morning, dipping by more than 13 percent, according to charts provided by OilPrice.com. The benchmark has not plumbed such depths since 2001, when the 9/11 terrorist attacks decimated air travel demand the world over, bringing Brent prices down along with it.

The US benchmark, West Texas Intermediate (WTI) crude, continued to lag on Tuesday, settling at just shy of $11 per barrel after its dramatic downward spiral earlier this week, which pushed WTI prices far into the negatives, briefly trading at an unprecedented -$37.63. While WTI has since ticked up in value, it was nevertheless down on Tuesday, taking a hit of some 3 percent.

The global oil market has endured major blows in recent months, with the ongoing coronavirus pandemic tanking demand for air travel and a major oil production dispute between Riyadh and Moscow helping to drive prices down to their historic lows. While the spat has since been resolved among members of OPEC+ – who agreed to restrict output to encourage prices to climb – world oil fees have struggled to recuperate. ‘Neural Meduza’. Meet the real person behind the AI network that’s spoofing our headlines on Twitter