Fashion fans claim there’s a noted contrast between how the Instagram pages of designer brands in the world of couture look now compared to the period before the recent Black Lives Matter protests began.

Earlier this month, US actress Niccole Thurman, who has starred in shows including hit comedy Shrill, tweeted an image of an Instagram page laid out in emojis, showing a sea of white faces, with emojis representing black people added at the top to reflect, she claimed, the recent Instagram activity of fashion companies.

Explaining how she felt many couture houses have begun including more black models since the global protests began following the death of George Floyd in Minneapolis on 25th May, she wrote: ‘Feel like this tweet will get me yelled at somehow, so let me just say I’m GLAD to see more beautiful black women in my feed.

This  tweet by actress Niccole Thurman has gone viral since she posted it over a week ago; she tweeted an image of an Instagram page laid out in emojis, showing a sea of white faces, with emojis representing black people added at the top to reflect recent Instagram activity of fashion companies

Many of those responding to Thurman’s image, which has had 60,000 views, agreed with her sentiment (Pictured: A recent trio of posts by Ralph Lauren on Instagram. Right: Images posted six weeks ago)

Thurman, who has now seen her post liked more than 60,000 times, then added: ‘It’s just THEY’VE BEEN THERE. THEY’VE *BEEN* BEAUTIFUL.

‘Why’re brands just now seeing them? Don’t think we’re not going to check in on you a month from now.’

Many people who saw Thurman’s emoji illustration agreed with its sentiment.

@LoveCrimeCat wrote: ‘Yeees!! And every goddamn photographer (nature photographer aside) I follow probably frantically searched their picture archive for that one shot of a black model they have to post last week, like “Look! I’m good! I take pictures of black people once in a while!!”

@IamSAMLDN wrote: ‘It’s only a matter of time until they go back to regular programming. I hope not but for some of these brands, it’s all performance.’

Others said they’d worked hard to always be inclusive. One fashion company wrote: ‘Not my fashion brand. I’ve always been inclusive. I’ve worked very hard to keep it that way for over a decade. It was part of my business plan from the beginning! Some of us TRY.’

Ralph Lauren referred FEMAIL to an open letter published on June 10th by the fashion house, saying the brand ‘was listening, learning and taking action’.

The brand wrote: ‘We recognize that, while dialogue is a much-needed first step, it is not enough.

We will also look critically at the structures and practices inside our Company, how we use our voice as a leader in our industry and the role we play in portraying American culture.’

Earlier this month, the editor-in-chief of British Vogue revealed how he’s ‘always aware of his increased personal danger’ when leaving his home, because of the colour of his skin. 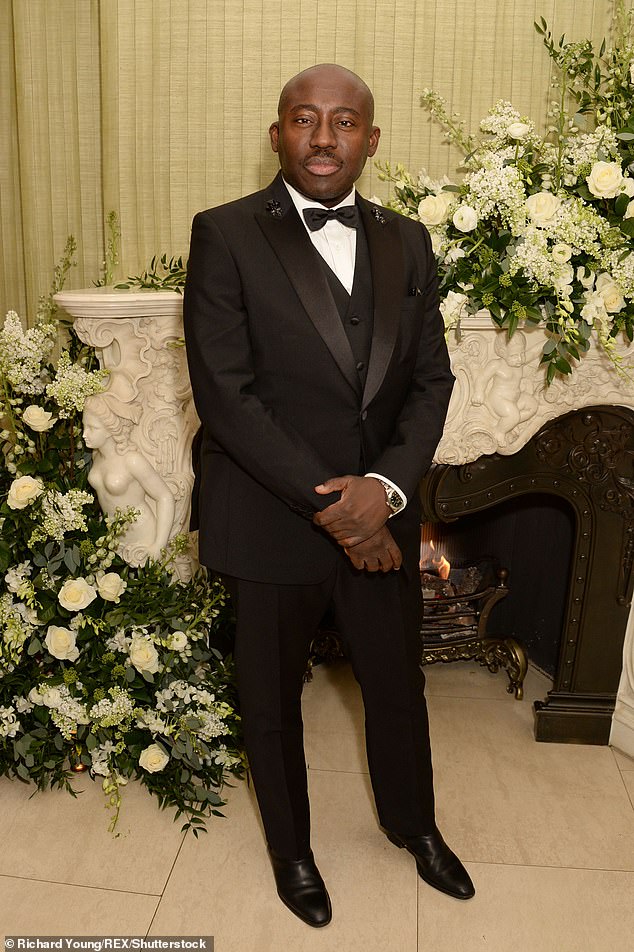 British Vogue’s editor-in-chief Edward Enninful (pictured) wrote for Vogue this month that he is ‘always aware of his increased personal danger’ when leaving his home, because of his skin colour after contributing to the discussion on racism

Edward Enninful, 48, wrote an emotive piece on the death of 46-year-old Floyd, who died in Minneapolis, Minnesota on May 25th after having his neck crushed by US police officer Derek Chauvin.

Reflecting on the global protests that have followed after a video surfacing of Chauvin kneeling on Floyd’s neck, Enninful said he felt ‘intense sadness’ at the killing.

The editor of the British fashion bible said that racism is an issue entrenched in all societies, and not just prevalent in the United States.

Enniful said he has been taught from childhood to ‘watch himself’ when leaving his home, and witnessed police persecuting and abusing black people from a young age.

He wrote: ‘When I step out of my door in the morning, to take a walk or to wander alone, I am always aware of increased personal danger because of the colour of my skin.’

Edward told that while he has privilege as an esteemed fashion editor, his life could still ‘feel worthless’ as a black and gay man.

Reflecting on the death of Floyd, Edward told that his emotions have ranged between ‘rage and sadness and fear’ and said the killing has shone a light on the amount of work globally that there still needs to be done to tackle racism.

The fashion guru was born in Ghana, but moved to Ladbroke Grove, West London, as a young boy, with his parents and five siblings.