President Donald Trump gives a fist pump to the crowd after speaking at the Students for Trump conference at Dream City Church, Tuesday, June 23, 2020, in Phoenix. (AP Photo/Ross D. Franklin)

President Trump has promised a bright future for America and said the country will emerge from the pandemic “stronger than ever.”

On Tuesday, the president addressed the crowds at a Students for Trump event at the Dream City Church in Phoenix, Arizona, which was sponsored by Turning Point USA.

In his remarks, President Trump highlighted his push to reopen the economy, while citing a report showing a gain of more than 2.5 million jobs in May. He claimed it was evidence the decision to move forward with reopening was in the country’s best interest.

The president also showcased his administration’s work on U.S.-China relations and boasted his work to remedy conditions he depicted as unfair and disadvantageous to America.

“What happened for many years, there’s nobody ever that ripped off the United States like China,” he stated. “But the long, slow surrender is over because today and every day we are putting now America first.”

President Trump went on to comment on activist groups seeking the removal of monuments nationwide by characterizing this as an unpatriotic left-wing campaign to uproot pieces of American history.

“The left wing mob is trying to demolish our heritage, so they can replace it with a new repressive regime that they alone control,” he stated. “…It’s not the behavior of a peaceful political movement, it’s the behavior of totalitarians and tyrants and people that don’t love our country.” 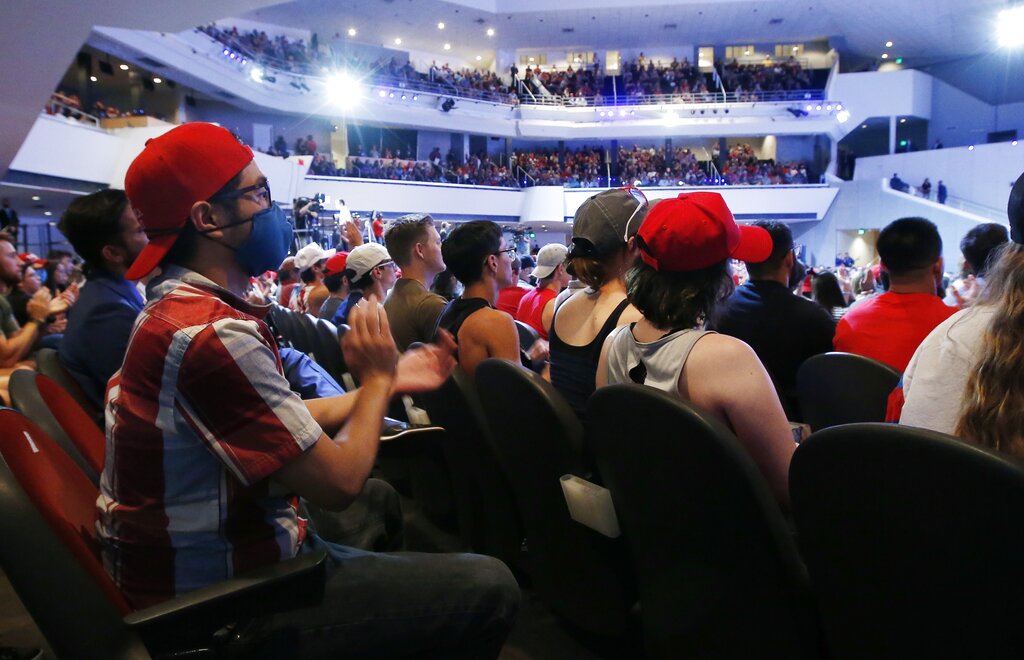 A supporter of President Donald Trump applauds a guest speaker prior to the president speaking at the Students for Trump conference at Dream City Church, Tuesday, June 23, 2020, in Phoenix. (AP Photo/Ross D. Franklin)

The president clarified he does not condemn efforts at expanding the reach of civil rights, but rather asserted his commitment to the cause of achieving equal treatment before the law for all Americans regardless of ethnic origin.

He quoted Martin Luther King Jr. as a source of inspiration for his views on racial justice. The president stated, “people should not be judged based on the color of their skin, but the content of their character.”

President Trump remarked he is optimistic about the future and believed the country will emerge from its current troubles even more prosperous than before.

Breonna Taylor Louisville protest marred by by violence after decision

Democrats in Pa. scramble to limit number of ‘naked ballots’