The 60-member Arunachal Pradesh Assembly on Thursday resolved to persuade the Centre for inclusion of the State under the Sixth Schedule of the Constitution to protect the rights of its indigenous communities.

Tribal areas of four northeastern States — Assam, Meghalaya, Mizoram and Tripura — are under the Schedule.

“We will place the resolution before the Centre explaining all the views expressed by the MLAs and the community-based organisations so that it can be taken up for discussion in both Houses of Parliament,” Mr. Khandu said, adding that the “tough journey began today [Thursday]”.

The one-day Assembly session was earlier scheduled for three days.

The Chief Minister also told the House that the Centre would be asked to open up the posts of Deputy Commissioners (DCs) of the State’s 22 districts for non-IAS officers.

The IAS officers of the AGMUT (Arunachal Pradesh, Mizoram and Union Territories) cadre are posted as DCs in the State.

“Our government has decided to appeal to the Centre to de-cadre the posts to open up promotional avenues for State civil services officers,” Mr. Khandu said.

He pointed out that the Assembly had in 2018 approved a separate IAS cadre for the State so that the bureaucrats are not transferred out frequently.

Janata Dal (United) MLA Hayeng Mangfi, who had raised the issue, said it was inhuman for Arunachal Pradesh Civil Service (APCS) officers to be in selection grade even after 27 years of service.

“The APCS officers of the 2003 batch are still in senior grade unlike in Karnataka and Tamil Nadu where State civil service officers are inducted to IAS grade after eight years. The State government should facilitate their career progression,” Mr. Mangfi said.

You have reached your limit for free articles this month.

Find mobile-friendly version of articles from the day’s newspaper in one easy-to-read list.

Move smoothly between articles as our pages load instantly.

Enjoy reading as many articles as you wish without any limitations.

A one-stop-shop for seeing the latest updates, and managing your preferences.

A select list of articles that match your interests and tastes.

We brief you on the latest and most important developments, three times a day.

*Our Digital Subscription plans do not currently include the e-paper ,crossword, iPhone, iPad mobile applications and print. Our plans enhance your reading experience.

A letter from the Editor

Your support for our journalism is invaluable. It’s a support for truth and fairness in journalism. It has helped us keep apace with events and happenings.

The Hindu has always stood for journalism that is in the public interest. At this difficult time, it becomes even more important that we have access to information that has a bearing on our health and well-being, our lives, and livelihoods. As a subscriber, you are not only a beneficiary of our work but also its enabler.

We also reiterate here the promise that our team of reporters, copy editors, fact-checkers, designers, and photographers will deliver quality journalism that stays away from vested interest and political propaganda.

A man holds poster reading “Putinizm ” during an unsanctioned protest in support of Sergei Furgal, the governor of the Khabarovsk region, who was interrogated and ordered held in jail for two months, in Khabarovsk, 6100 kilometers (3800 miles) east of Moscow, Russia, Saturday, July 25, 2020. (AP Photo/Igor Volkov) 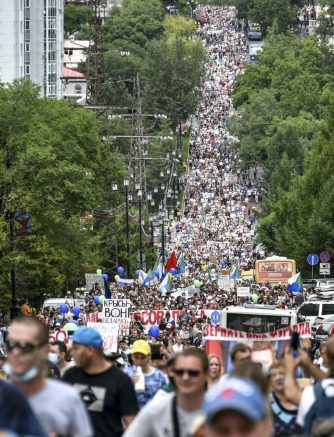 Furgal was taken into custody at the beginning of July over murder charges, which his supporters believe are politically motivated.

Supporters claimed he was removed from office after defeating an ally of President Vladimir Putin in 2018.

“We want Sergei Ivanovich Furgal to be freed. Our governor we voted for, who is now in Lefortovo (Detention Center) probably being tortured. …We believe that he did not kill anybody, did not order to kill anybody. Those murders, it is doings of criminals. Sergei Ivanovich has nothing to do with it.” – Unnamed protester

NSW’s COVID-19 death toll now stands at 36 after a sixth resident died at a western Sydney aged care home where almost 50 people have been infected.

This follows the death of a 96-year-old woman on Friday morning, a woman in her late 70s on Thursday and earlier fatalities of a woman and two men all aged in their 90s.

The facility is the state’s largest ongoing cluster, with some 31 of the almost 100 residents having been infected as well as 17 staff members.

An aged care worker at the healthcare facility in the Blue Mountains also tested positive for coronavirus, one of 12 new cases confirmed in NSW on Saturday.

The worker from Catholic Healthcare Bodington had not been at the aged care home within 48 hours of showing symptoms, Channel 7 reported.

NSW Health said no other positive cases had been confirmed at the facility. The total number of confirmed cases in NSW is 2994, more than 44 per cent of Australia’s total number of cases at 6695. Some 19 people are in intensive care in NSW.

The 600 medicines now in short supply

The majority of NSW confirmed cases have been found in people aged 20 to 29, with 635 positive tests making up more than 21 per cent of the state’s total cases.

This comes as the controversial app to help trace people who come into contact with someone with COVID-19 will be launched on Sunday.

The Australian app is based on Singapore’s Tracetogether software, which records the Bluetooth connections a phone makes with others so the user can give that data to state health authorities if they catch the virus.

Home Affairs Minister Peter Dutton, who has recovered from a bout of COVID-19, said it was a more effective approach than checking your diary or trying to remember where you had been.

“The beauty of the app is that it can have a handshake, if you like, with people that you’ve been in close proximity with, find the phone,” he told Sky Sunday Agenda.

He said the privacy issues had been dealt with, and said the app would help the authorities stop the spread of the virus.

“It’s an incredibly important next step.”

A broader testing regime and a government contact tracing app are seen as key stepping stones to a relaxation of the economic shutdown.

The government wants at least 40 per cent of the population to sign up so officials can do “industrial-scale” contact tracing.