This final pre-auction episode features George discovering why a pool isn’t a necessity in a Melbourne house, Jasmin discovering that if you leave brand new furniture by the side of the road you shouldn’t expect it to still be there when you get back, and Keith and Harry getting in one final argument.

RELATED: How this year’s Block’s inspections will work

Controversy as Block identity sells her Hampton house to the show

George has to get a custom timber bench into the pool cabana area, and the only way to do it is via the pool. As he wades in waist-deep water, before the pool heater is turned on, the Queenslander gets his first taste of actual cold.

“Now I know how the guys on the Titanic felt,” he says.

George finds out what it’s like to swim in balmy Melbourne.

Jasmin, meanwhile, has turned up at Freedom to collect an outdoor coffee table and chairs, only to discover her husband Luke has left a pallet of tiles in the back of her ute.

She and the Freedom dude tie the items up on top of the tiles as best they can, but don’t reckon on the tiles shifting as she drives home, and as she builds up some speed on the freeway the coffee table goes flying off the back of her ute.

By some miracle it doesn’t take out another driver, and she manages to collect it before making the insane decision to leave the furniture on a random footpath while she goes to get the tiles unloaded.

Jasmin watches in horror as her coffee table flies off the back of her ute and on to the freeway.

Luke, along with every Block viewer, is incredulous. He unloads the tiles quickly but Jasmin then gets stuck in the carpark behind a soil delivery van for about half an hour. By the time she returns to the street where she left her furniture, it’s gone, in a blow to Melbourne’s reputation.

She discovers her wares neatly stacked inside the front gate of a nearby house, and the occupant has the absolute cheek to ask to see a receipt for the items before he agrees to let her take them back. I can’t decide if that’s another blot on Melbourne’s rep, or an admirable piece of chutzpah.

At Harry and Tash’s place, Harry is having his final dust up with Keith. Keith and Dan have found out Harry is planning to finish a few jobs on the house next week, despite the fact the deadline for completion for all the contestants is that Sunday. We’ve already seen Harry take advantage of being a Melburnian when he sneaked on to site to do some measuring during lockdown, but he’s not going to get away with it again.

“No-one can come back next week,” Dan says.

“All the shifty stuff has to stop,” Keith agrees.

Harry rolls his eyes and pledges to get the job done, thus bringing an end to his “shifty stuff” two days out from the final.

And so it’s on to the judging.

Harry and Tash were so cash strapped this week they can’t do much more than pave their sideyard and chuck some plants here and there, but they still manage to waste money on building a wall behind the front door, separating the front and back yards. They do this for privacy and security reasons, despite the fact there is a high front brick wall, which would stop anyone seeing into the back yard anyway.

Harry and Tash’s sideyard, and that offending wall, dividing front from back.

“Why would you do that?” Shaynna Blaze asks, pointing out they’ve lost the advantage of being the only house with a garden that wraps right around the building.

“It’s just so wrong,” Neale Whitaker says. “On every level it’s wrong. It’s got to go. I feel like doing it myself now.”

They’ve also run out of cash to dress their poolside cabana area.

“It does feel unfinished and undercooked,” Neale says.

Sarah and George, on the other hand, haven’t undercooked a thing.

Their side courtyard has an enormous built in planter with a Japanese maple, which will serve to block the view from the neighbours’ stairway as it grows.

The backyard has a built-in table which looks cantilevered, a mature olive tree and a graphic of Brighton Beach boxes and a hanging chair in their cabana.

“My mind is blown,” Darren says.

Daniel and Jade’s courtyard leaves a good first impression, but quickly reveals itself to be underdone. There’s a couch and two chairs and a planter box with olive trees but no thought has been given to creating a screen between the courtyard and their neighbours’ stairway.

“It’s not a comfortable place to sit,” Neale notes. “It’s pleasant but I can see myself waiting to sit here very long.”

Their backyard is more successful with armchairs, outdoor rug, fan and outdoor shower. That is until Shaynna notices that in order to use it you have to stand in the dirt straddling a plant. They also lose points for their pool area, which has a nice daybed facing two enormous bare walls.

“There is no atmosphere in here at all,” Neale notes. “I’m looking at one black wall and a concrete wall.”

Daniel and Jade’s pool area was half resort, half prison yard.

Luke and Jasmin threw everything at their outdoor area this week, scrimping, begging and saving to come up with a custom wave daybed and a water feature which drowns out any street noise for their courtyard, but they too are let down by not considering privacy.

But their backyard gets huge raps.

Luke and Jasmin’s courtyard area with custom made day bed.

“We have never seen anything delivered to this level on The Block.” Neale says of their space, which includes a table built around a structure pole with curved built in seating, fire pit and pizza oven. They lose a few points by not having a built-in barbecue or covered area.

Luke and Jasmin’s backyard featured their signature curves. If only they had built in their barbie.

Jimmy and Tam win the battle of the courtyards for their Besser brick feature wall painted coral with planter box of bamboo which will create a fast-growing screen between them and their neighbours.

In the backyard their artfully created “zones”, built-in barbecue and candy striped sun loungers win them plaudits, but they make a major error with their strange little cabana with sliding glass doors.

Jimmy and Tam’s courtyard had a coral coloured feature wall and bamboo which will provide an excellent privacy screen.

The doors are completely unnecessary and make the space look like a “bus stop” according to Shaynna.

“They’ve given us a changing room with glass doors,” she says.

And so to the scores. Fan faves Sarah and George come out on top for the third week in a row, finishing strong with three perfect tens after a wobby start on the show. They steal the win by just half a point from Luke and Jasmin, but at least Jimmy and Tam didn’t win again.

That was beginning to get boring.

Jimmy and Tam’s poolside area scored high for the mosaic tile feature wall, but failed for the bus stop-like cabana.

Episodes 46/47: ‘It would be unfair if you were in contention’

Episode 45: ‘I worked my a..e off, for what?’ Jasmin’s tough run in with plasterer

Episode 36: ‘We should have won’: win splits Block besties

Episodes 34/35: Why Mark and Mitch aren’t impressed by Harry and Tash

Episode 32: The Block’s most heartwarming moment

Episode 29: Why Harry and Tash didn’t deserve their win

Episode 26/27: Harry storms off The Block

Episode 23: ‘It’s not in the spirit of the game’: Scott Cam slams copying


Episode 22: ‘They won with somebody elses idea’

Episode 21: Why Dan’s tradies walked off the job

Episode 17: ‘It’s shifty’: why the contestants are dirty on Harry

Episode 16: The most jaw-dropping bathrooms The Block has seen

Episode 10-11 recap: The new Block rule that could ruin the season

Episode 2 recap: Disappointment as Block houses are handed out

1. A Swiss tourist visited Disneyland Paris in 2019 and decided it would be a good idea to take LSD. He fell into a lake. When he didn’t resurface, his girlfriend reported it to park staff and they launched a manhunt.  The search included 10 policemen, 30 firefighters, 80 Disneyland employees, a helicopter, and a thermal camera, according to The Washington Post. The following morning, a driver in a nearby town came across a naked man walking along the road. The driver returned the man to Disneyland Paris, where he was identified as the missing person. The couple were then arrested for narcotics use but were eventually let go with a citation, according to Le Parisien.  Worst. Trip. Ever. Picture: Getty 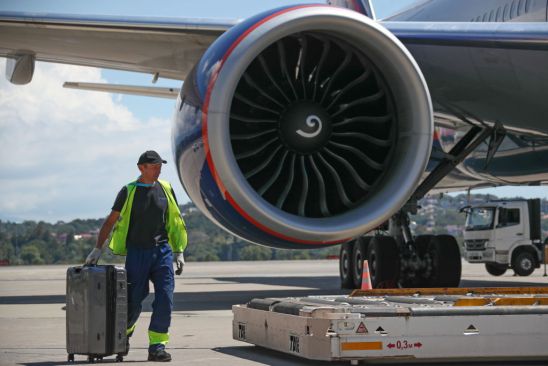 2. At an a airport in Mongolia in April last year, a 66-year-old Chinese woman reportedly threw six coins at the jet engine when she was boarding the plane, according to the Daily Mail. After being removed from the aircraft, she told authorities she was praying for a safe flight. Concerned the rogue coins could damage the engine, passengers were transferred to a new plane, delaying them for two hours. Picture: Getty 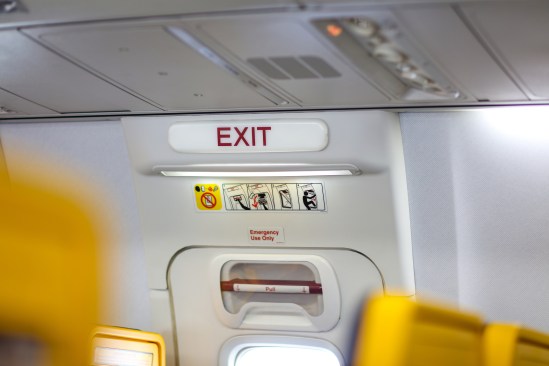 3. Last year a man on a Pakistan International Airlines flight went to use the bathroom while the plane was still on the tarmac. Instead, he opened the emergency exit door, activating the emergency exit slide. All 40 passengers on the plane were evacuated and the flight was delayed seven hours. Can you imagine the dirty looks he would have been getting at the baggage carousel at the other end. Picture: Getty 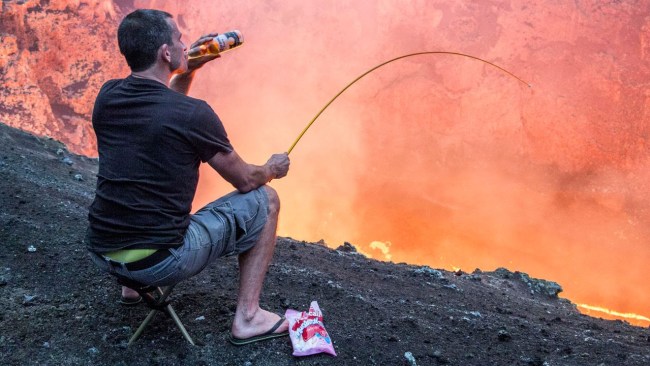 4. In 2015 Simon Turner hiked to the top of the Marcum Crater in Ambrym, Vanuatu and roasted a marshmallow in a 2,000-degree lava pit. While wearing thongs. Thankfully for Simon it turned out okay. He retained his eyebrows and the video of him doing it got a bunch of hits on YouTube. Picture: YouTube 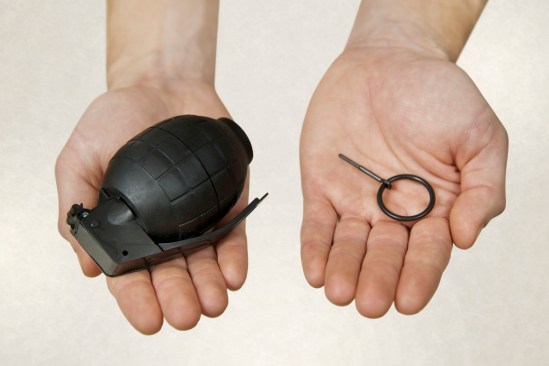 5. In 2015 two men were hiking in the Ural Mountains of Russia and happened upon a grenade with the pin pulled. Most people would back away slowly or run like crazy. Not these daredevils! They decided to take a selfie with it. They blew themselves up. (But incredibly, their smartphone survived). Picture: Getty 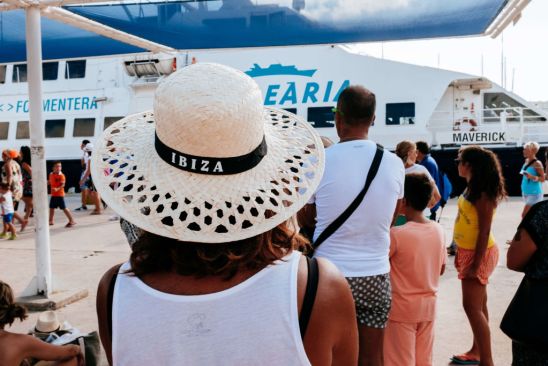 6. A few years ago a bunch of (predominantly British) tourists were involved in a “food poisoning scam” that involved claiming compensation from hotels for bogus illnesses. The scam was prevalent in Spain and other European countries. But it didn’t pay off for everyone. One couple (who allegedly suffered stomach cramps and severe diarrhoea), were busted when it was discovered they had enjoyed 109 alcoholic drinks during their short holiday. Picture: Getty 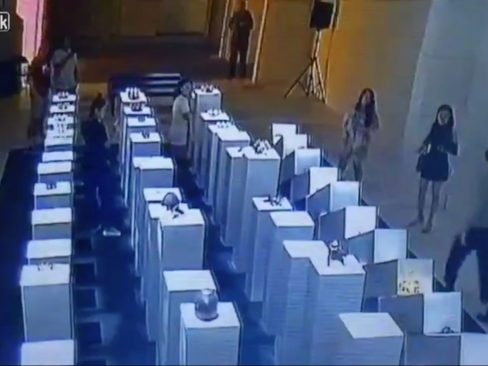 7. This has to be one of the most cringe-worthy videos of all time. A tourist tries to take a selfie in the middle of a sculptural installation (at 14th Factory in California), loses her balance and knocks the pillars over in a domino effect. This caused $200,000 worth of damage to the artwork. Picture: LiveLeak 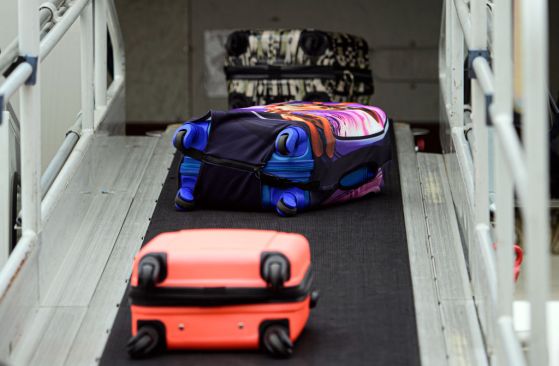 8. We’ve all been there. You’re at the airport and the announcement comes over the PA that your flight has been delayed. You feel frustrated and annoyed. It’s something many of us can relate to. What we probably can’t relate to is being so annoyed that you set your own luggage on fire in protest. But that’s exactly what one fellow did in the middle of the airport when his 7am flight from Islamabad International Airport was delayed in 2018. There’s even video of it. 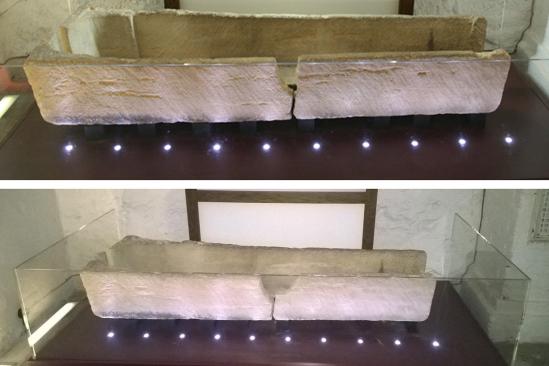 9. “You know what would be funny?” said the woman to her partner. “If we put our child in this 800-year-old sarcophagus at the Prittlewell Priory Museum in Southend, England for a photo-op”. Thinking a photo of your kid in an old coffin is going to make strong Instagram content is already a bit off, but it really comes unstuck when a chunk of the priceless coffin breaks off. The family quickly left without notifying staff, but were later caught on CCTV footage.