Wales winger Gareth Bale, 31, is keen on a swansong season at Real Madrid following his loan spell at Tottenham. (AS)

Inter Milan’s Danish midfielder Christian Eriksen, 28, is ready to turn down a Premier League return and hold out for a move to Paris St-Germain. (Star)

Arsenal’s French defender William Saliba, 19, is keen for a loan spell elsewhere in England rather than a return to France in January. (The Athletic – subscription only)

Everton are confident of keeping English left-back Thierry Small despite the 16-year-old being linked with Arsenal, Bayern Munich and Juventus. (Liverpool Echo)

Juventus president Andrea Agnelli says the club have offered Argentine striker Paulo Dybala a contract extension, after the 27-year-old claimed he had not been offered one. (Tuttosport via Football Italia)

Watford striker Troy Deeney says Arsenal manager Mikel Arteta must hold a crisis meeting with players after the club’s defeat by Burnley at the weekend. (Talksport) 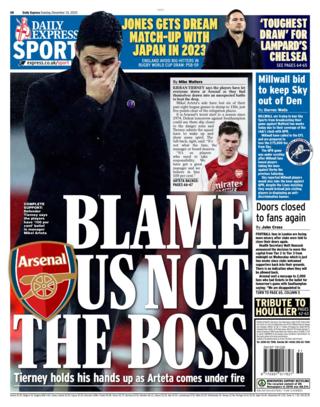 However, United’s hopes of signing Upamecano in January may have been ended by their elimination from the Champions League. (Express)

Chelsea would need to make David Alaba their highest earning player if they are to bring Bayern Munich’s Austrian wing-back, 28, to Stamford Bridge. (Mirror)

Sheffield United are considering a move for Manchester United’s Argentine defender Marcos Rojo, 30, who is keen to leave for regular playing time. (Mail)

Denmark midfielder Christian Eriksen’s salary at Inter Milan will likely see the out-of-favour 28-year-old priced out of a return to the Premier League. (Telegraph – subscription required)

However, the Gunners expect to face competition from RB Leipzig, with Bayern Munich and Real Madrid also thought to interested. (Sky Sports)

West Brom have begun identifying replacements for manager Slaven Bilic, who could lose his job if his side are beaten by Newcastle on Saturday. (Mail)

Aston Villa could look to bolster their attacking options in January if Brazil striker Wesley, 24, has not returned from injury. (Mail)

Manchester United are assessing the success of their loan decisions, with a number of the club’s youngsters concerned about a lack of playing time. (MEN)

United’s senior players fear the team’s inconsistent form is in part due to the number of tactical and selection changes being made by manager Ole Gunnar Solskjaer. (Telegraph – subscription required)

England forward Marcus Rashford, 23, says he wants to remain at Manchester United for the rest of his career. (Times)

Friday’s back pages: Star Sport: ‘Once a red, always a red’

Inter Milan want to bring in Chelsea’s France forward Olivier Giroud, 34, on a six-month loan deal in January, with an option to buy. (Tuttosport via Mail)

Chelsea will open talks with Bayern Munich defender David Alaba, 28, in January as they aim to sign the Austrian on a free transfer when his contract expires next summer. (AS via Sun)

Manchester United are hoping Villarreal could be tempted to take back their former player, 26-year-old Ivorian defender Eric Bailly, as part of their £60m pursuit of the Spanish side’s Spain centre-back Pau Torres, 23. (Team Talk)

Liverpool will be able to sign Ajax defender Perr Schuurs if they offer £27m for the 21-year-old. (De Telegraaf via Liverpool Echo)

Tottenham are monitoring Sassuolo centre-back Gian Marco Ferrari, 28, ahead of a possible move for the Italian in January. (90min)

Manchester United could move for Inter Milan midfielder Christian Eriksen, 28, if the Denmark international is not wanted by former club Tottenham. (Football Insider)

France and Fulham goalkeeper Alphonse Areola, 27, says he turned down a number of other clubs including Real Madrid and Paris St-Germain in favour of the Premier League club. (Canal+ via Football London)

Rangers winger Ryan Kent’s decision to change agents in the summer could lead to the 24-year-old – who was linked to Leeds last summer – moving on from Ibrox, according to former Gers boss Alex McLeish. (Glasgow Evening Times)

Bayern Munich midfielder Javi Martinez, 32, has hinted he will leave the German champions when his contract ends next June, saying he would like to “try something new”. (Reuters via Eurosport)

AZ Alkmaar’s midfielder Mohamed Taabouni, 18, is set for a move to Italy or Spain in January, with a number of clubs interested in the Netherlands youth international. (Voetbal International – in Dutch)

Newcastle are keen to sign the Eintracht Frankfurt’s Jetro Willems, 26, on a permanent deal after the Netherlands defender was forced to cut his loan spell at St James’ Park in January because of a serious knee injury. (Shields Gazette) 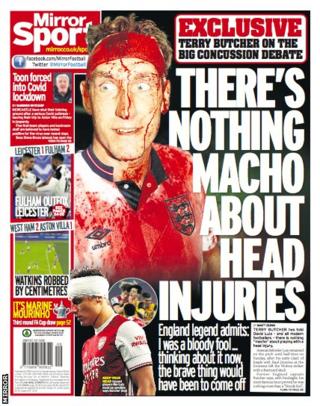 England slipped to third place in group A2, which is now headed by Belgium with Denmark above England on goal difference.

“Disappointed to lose the match but extremely proud of how we responded to going down to 10 men,” said England manager Gareth Southgate, who rather surprisingly opted not to send on Aston Villa’s creative midfielder Jack Grealish when chasing the game.

“We had a few chances that on another day would have gone in. The 10 men changes the game and they get a soft penalty.”

While it was a memorable night for Danish playmaker Eriksen, it was a disappointing one for England who suffered only their second home defeat in 32 competitive internationals.

There were some positives, however, notably an encouraging full debut for Chelsea right back James who was arguably England’s most effective attacking option, only to blot his copybook as tempers flared at fulltime.

Denmark, playing with the same side that beat Iceland at the weekend, started brightly with Kasper Dolberg having a couple of half chances and Eriksen pulling the strings but England had begun to dominate when everything changed after 32 minutes.

Maguire, who had been booked for a rash foul on Yussuf Poulsen, took a poor touch near the halfway line and his attempted recovery tackle, while taking the ball, also caught Dolberg to earn the Manchester United man a second yellow.

Three minutes later, with England still re-organising, a long ball into their area caused hesitation in the home defence between Kyle Walker and Pickford and when Thomas Delaney went down the referee pointed to the spot.

It was a harsh decision but with no VAR to save England, Eriksen thumped his penalty past Pickford.

England enjoyed plenty of possession after the break without looking overly dangerous although Denmark needed an incredible save by Kasper Schmeichel to preserve their lead.

When Declan Rice headed the ball into the area and Mason Mount connected with his head from close range, a goal looked certain but somehow Schmeichel clawed it away.

England huffed and puffed late on and Harry Kane’s goalbound header was cleared off the line as Denmark hung on.

Elsewhere, Italy slipped to second in their Nations League group after they were held to a 1-1 draw by the Netherlands in a game that paid tribute to Bergamo’s many victims of the coronavirus pandemic.

Poland moved top of group 1 in league A after beating Bosnia-Herzegovina 3-0. They have a point more than Italy and two more than the Netherlands.

“No problem, we’ll win both the matches and we’ll qualify for the final phase,” Italy coach Roberto Mancini said.

France stretched their unbeaten run against Croatia to eight games after a late goal by Kylian Mbappe gave the world champions a 2-1 win in their top-tier group 3 match.

The result left France second in the group on 10 points from four games, behind Portugal on goal difference after the European champions brushed aside Sweden 3-0. Croatia have three points and the Swedes none.

“We started very well and it’s a pity we didn’t go two goals clear as Kylian had a big chance. We did what we needed to do in the second half.

“It’s not because we won a trophy in 2018 that you win by clicking your fingers. You have to look at the way the opponents play too.”

Scotland closed in on promotion to the top tier after winning their top-of-the-table clash with the Czech Republic as the races in the other three League B groups remained extremely tight.

An early Ryan Fraser goal was enough to edge the Scots past their nearest rivals and open up a four-point lead at the top of group 2, with a single point still separating the top sides in groups 3 and 4, and Austria and Norway neck and neck in group 1.