Barcelona’s France forward Ousmane Dembele, 23, was not interested in joining Manchester United before the transfer window closed and is targeting a move to Juventus next summer. (Catalunya Radio, via Mirror)

Manchester United will not make a move for Watford’s Senegal international Ismaila Sarr, 22, before the EFL transfer window closes on 16 October. (Goal)

Tottenham boss Jose Mourinho is set to leave English defender Danny Rose, 30, out of his updated 25-man squad list, which has to be completed by 20 October. (Mail)

West Ham’s Brazil Felipe Anderson says he is “fulfilling his dream” of playing Champions League football with a season-long move to Porto but believes he still has a future with the Hammers. (Talksport)

West Ham remain keen on adding a centre-back from the Championship while they will also look for a midfielder to replace Anderson. (London Evening Standard)

Manchester United’s Argentine goalkeeper Sergio Romero, 33, is lining up a move to Major League Soccer after missing out on joining Everton on deadline day. (Mail)

West Brom are confident of completing the signing of Huddersfield’s English forward Karlan Grant, 23, before next Friday’s EFL deadline. (Mail)

Germany boss Joachim Low claims Antonio Rudiger “tried everything to leave Chelsea” before deadline day and believes the 27-year-old defender will again seek a move in the January window. (Sun)

Bayern Munich, who were unable to agree a loan deal for England winger Callum Hudson-Odoi, 19, were told by Chelsea that there would be a penalty clause if he did not play enough games for the Bundesliga club, plus an obligation for Bayern to buy him for over £70m if he reached a certain number of appearances. (Sport Bild)

Grealish was one of four Ole Gunnar Solskjaer targets that Manchester United were unable to sign before the transfer window closed. (ESPN)

Manchester United’s latest addition, Uruguay forward Edinson Cavani, 33, has revealed that he is keen on a move to Argentine side Boca Juniors after his stint at Old Trafford ends. (Goal)

Croatia midfielder Luka Modric, 35, is determined to stay at Real Madrid and would accept a pay cut to remain with the Spanish club. (Marca)

Former England midfielder Jack Wilshere, 28, thought to be in advanced talks with Rangers, is confident of securing his next club following his release by West Ham. (Daily Record)

Barcelona have begun a process to lower the wages of all the staff on their payroll, including first-team players. (Marca)

Rangers are set to open talks with English winger Ryan Kent, 23, over a new contract after thwarting interest from Leeds. (Football Insider)

Brighton’s Polish midfielder Jakub Moder, 21, on a season-long loan at Lech Poznan, could return to the Seagulls in January. (Argus)

Aston Villa’s Argentine goalkeeper Emiliano Martinez, 28, admits he “fell out of love with football” at Arsenal but left the club “on a high” and at the right time. (Independent) 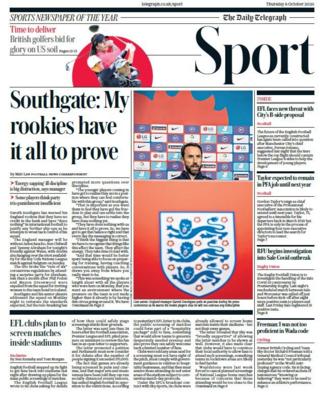