A HASTINGS man is fed up with the lack of support he is receiving in trying to control rabbits coming onto his property.

Colin Fitches said the rabbits were from a much larger property behind his 0.809 hectare block on Hodgins Road.

Because his land is privately owned, he says Mornington Peninsula Shire Council won’t do anything about them.

“The situation’s so bad it’s gone beyond a joke,” Mr Fitches said.

“I’ve been here 20 years but the last 12 months have been the problem.

“I can sit outside and watch them coming onto my property.”

Mr Fitches said he had been in touch with the Agriculture Minister, Hastings MP Neale Burgess, the shire’s biodiversity officer and the Cranbourne office of the Department of Agriculture.

They all offered advice, but the end result is that Mr Fitches is left with a very expensive problem not of his making.

“I’ve been told the land owner behind me is responsible. He has extensive areas of [noxious weed] blackberry and tea tree over two metres tall on his property and he has been told to clean them up,” he said.

So far, that approach has not worked and even the Agriculture Department – which has been in contact with the neighbour – admits “there will [not] be much action there”.

Mr Fitches says a housing estate further west along Hodgins Road has also “pushed” the rabbits towards his property.

“I’ve been buying carrots to bait them at $5 a bag which I soak in [rat poison] and I’ve also been advised on how to procure K5 calicivirus at $130 a vial,” Mr Fitches said. “They burrowed under the water tanks and that cost me $6000 to repair.”

Mr Fitches said he had noticed “warrens all over the place” in the past six months. “I see them everywhere but how much time and money do I have to spend to control them?”

That’s a hard question to answer as a single female rabbit can produce up to 160 kittens a year, of which 80 per cent are female.

Agriculture Victoria, which has been in contact with Mr Fitches neighbour recommended he erect “exclusion fencing along the back where you think they’re getting in”. Mr Burgess said he was contacted by Mr Fitches and another constituent in December about “out of control rabbit populations” on the peninsula.

“Mr Fitches lives on two acres and his property is being destroyed by rabbits who inhabit 20 acres behind him,” he said. “Another constituent owns a Christmas tree farm and rabbits are causing significant damage to his property and business.”

Mr Burgess said he wrote to the Agriculture Minister Mary-Anne Thomas in mid-December and that the reply placed the onus of rabbit control onto the landowners.

“Both our constituents feel that due to the breeding patterns of rabbits, they cannot manage this pest control without intervention from the department,” he said.

“In the minister’s reply, it was mentioned that the constituents could purchase the K5 virus at their own expense to control populations. A quick search online shows you can only purchase this virus if you have a pest control licence.”

Thank you for dropping in to My Local Pages and checking this news release involving “News & What’s On in The Frankston & Mornington Peninsula Region titled “Landowner seeks help to avoid rabbit takeover”. This news article was presented by MyLocalPages as part of our local and national events & what’s on news services.

IN 2006, Casino man Don Bennett had plans to rezone land he owned at Spring Grove for a rural residential development.

But the proposal was knocked back by Richmond Valley Council, which stated it was “not in a position to progress the matter due to the large volume of undeveloped rural residential land on the market at that time, and low demand”.

There were also concerns about the layout of the proposed subdivision.

The council wrote to Mr Bennett to ask him to reconsider his plans for the Gregors Rd site.

“Council wishes to revisit your rezoning submission and would like to arrange a meeting with you to discuss this further,” a letter from the council’s coordinator of strategic planning and environment stated.

Fast forward five years and Mr Bennett has a fresh planning proposal with the council, and it is now on public exhibition.

According to documents lodged by town planners Newton Denny Chapelle, the property is currently used for cattle farming.

If approved, the planning proposal would create 18 rural residential lots and most would be one hectare in size.

A larger, 20ha residual lot would preserve the natural features and vegetated areas of land within the northern portion and south western corner of the site, which will retain the current RU1 – Primary Production zone.

Parts of the residual lot will be rezoned to E2 Environmental Conservation Zone for those areas of confirmed High Environmental Value (HEV) land.

“The community benefit of the rezoning will be realised through the increased lot density and the associated provision of additional housing to service the future population needs of the Richmond Valley LGA,” the town planners’ report states.

“The impetus for the submission of this rezoning application has been triggered through correspondence issued to the landowner from Richmond Valley Council.

“In this regard, the previous rezoning application submitted for the land back in 2006 was not progressed due to the large volume of undeveloped rural residential land on the market at that

time and low demand for such development.

“Due to the time lapse since 2006, demand has increased for rural residential type allotments which has resulted in lot supply dwindling over time.

“Accordingly, Richmond Valley Council have expressed an interest in revisiting the rezoning of the subject land.”

Submissions on the rezoning of the site on Gregors Rd, Spring Grove, close on December 18.

Documents can be inspected online or at the council’s customer service centre, 10 Graham Place Casino, between 8.30am and 5pm, Monday to Friday.

To make a submission, email council@richmondvalley.nsw.gov.au, fill out the form here or write to Locked Bag 10, Casino, NSW 2470.

By Tom Pyman For Mailonline

This is the moment a landowner appears to catch an alleged fly-tipper dumping a table and a desk outside their gate – and forces her to put the rubbish back in her car and take it away with her.

Footage posted on social media shows a woman picking up furniture which was left by the side of a road in Enfield, north London and putting it into the boot of her car.

Another woman, who is recording the incident, accuses her of fly-tipping, which is illegal and could result in a fine up to £50,000 or a year in prison.

An ugly verbal confrontation breaks out between the two parties and the woman filming it vows to shame the alleged fly tipper on social media.

The accused woman notices she is being filmed and asks: ‘Do you have to do this?’

The landowner replies: ‘Yes I absolutely do have to. It’s people like you that do this and then innocent people have to pay your costs, yes? Disgusting.’

A man then appears and adds: ‘Are you having a f***ing laugh? You’re tipping this outside my gate.’ 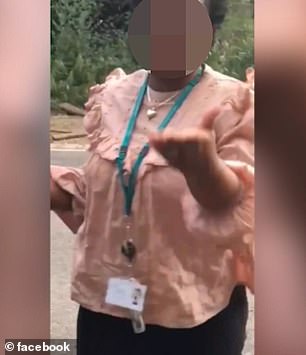 The woman is seen putting furniture from the side of the road into the boot of her car, pictured left, and, pictured right, asks the person filming ‘Do you have to do this?’

The argument rages on as the woman continues to pack away the items into her car.

The man then tells the woman filming to take note of the vehicle’s number plate.

When the apparent fly-tipper refuses to give her name, the woman filming tells her she will ‘name and shame’ her on Facebook.

The clip has been viewed more than 28,000 times on social media.