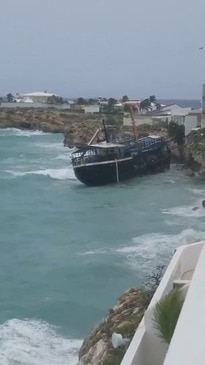 Tropical Storm Laura brought heavy rain, strong winds, and rough seas to the Caribbean island of St Maarten on August 22. The storm was expected to impact several countries on Saturday into Sunday, including the US Virgin Islands, Puerto Rico, the northern Leeward Islands, the northern coasts of the Dominican Republic, Haiti, the Turks and Caicos and southeastern Bahamas. The National Hurricane Center warned that the heavy rain could “cause mudslides and flash and urban flooding through Sunday.” The storm was expected to enter the Gulf of Mexico on Monday as it moved west-northwest over the weekend, though the intensity and track remained uncertain. This footage was posted to Twitter by user @Crush255, who said it was filmed on Saturday as rough seas from the storm battered a St Maarten party boat that had been washed onto the rocks during a previous storm. The Tropical Storm Warning related to Laura was discontinued for the island as of noon on Saturday, officials said. Credit: @Crush255 via Storyful