Two gay men who were forcibly returned to Chechnya this month have been charged with terror-related offenses without proof and face up to 15 years in prison, a rights group said Wednesday.

Authorities in Russia’s restive region of Chechnya have come under fire in recent years from rights groups, which accuse officials of jailing and torturing homosexuals in secret prisons.

The LGBT Network rights group said Wednesday that two gay men who fled Chechnya last year but were arrested and returned this month have been charged with aiding an illegal armed group.

Salekh Magamadov, 20, and Ismail Isayev, 17, face up to 15 years in prison if convicted, the NGO said.

“Investigators however did not provide any objective proof of Ismail Isayev and Salekh Magamadov’s guilt,” the rights group said in a statement.

The men, who are detained in the regional capital Grozny, told their lawyer that they had been forced to sign statements and testimonies incriminating themselves, LGBT Network said.

The group helped Magamadov and Isayev flee Chechnya for Nizhny Novgorod northeast of Moscow in June last year after they were allegedly tortured by Chechen police.

The rights group says Magamadov and Isayev were arrested and tortured by Chechen police in 2020 for their sexual orientation.

It said authorities officially accused the men of operating a Telegram channel critical of government officials.

After their arrest but before they left the republic, the men were forced to record a video apology in which they said “they weren’t men,” LGBT Network said.

The European Court of Human Rights earlier this month ordered Russia to take action on Isayev and Magamadov, saying they should be examined by independent doctors and access to them should be granted to their lawyer and family.

We hope you enjoyed checking out this news article on current Russian and Political news called “2 Gay Chechens Held on Terror Charges Without Proof – NGO”. This post was presented by MyLocalPages as part of our local news services.

Approximately € 1.6 billion euros worth of Spain”s former currency, the Peseta, remains unaccounted for. And as the deadline to convert the currency draws closer, a charity is collecting the cash to help ease a burgeoning poverty crisis, and feed people in Madrid.

The old notes and coins are still convertible currency and now the organisation ‘Peseta solidaria’ has decided to put it to good use. To donate, all people have to do is sign up on their website. They collect them door to door, change them into Euros and then donate them to food banks.

For Laura Blanco, the organisation’s founder, this is a way of giving “a noble and generous end to the peseta”, allowing some Spaniards to help others in this time of need. Blanco goes on:

“Despite the crisis, they want to give something to others, and maybe they don’t have Euros, but they have Pesetas, and it’s a way to help. From a lady who lives in Getafe who had a collection of banknotes that her sister had left for her children, to a man who heard the news, but has no Internet or mail or anything, called the Food Bank and said I have eight kilos of coins, and I want to donate them”.

There are still millions worth of euros in pesetas like these in Spanish households. That is why the government has extended the deadline to convert them to euros, from this December to September 2021.

Mila Benito is involved with a food bank that benefits from the scheme:

“These are people who work and are in poverty, which is even worse, because they have such small salaries that they don’t make ends meet. Several times I’ve picked up the phone to people who told me that they used to volunteer at the food bank and help others, and now they call because they need the help. And there is an added problem because we come from the crisis of 2008, so there were no savings left in the families”.

Before the pandemic there were around 350,000 people living in poverty just in the capital Madrid. The Food Bank fears, due to COVID-19, the situation will reach crisis point in January.

Watch Euronews’ full report in the player above.

By Ross Ibbetson For Mailonline

Seventy migrants jumped overboard today and swam away from the Spanish NGO ship that had rescued them as they tried to reach Italy.

They are part of a group of 270 people who have been stranded for days off the coast of the Sicilian city of Palermo on the Spanish rescue vessel Open Arms.

The desperate swimmers became frustrated by the diplomatic wranglings over who should take custody of them and so headed for shore in their life jackets, the local Giornale di Sicilia reported.

Open Arms rescued three separate groups in the Mediterranean between September 8 and 10. The crew are still waiting for instructions on where the migrants will be allowed to disembark. 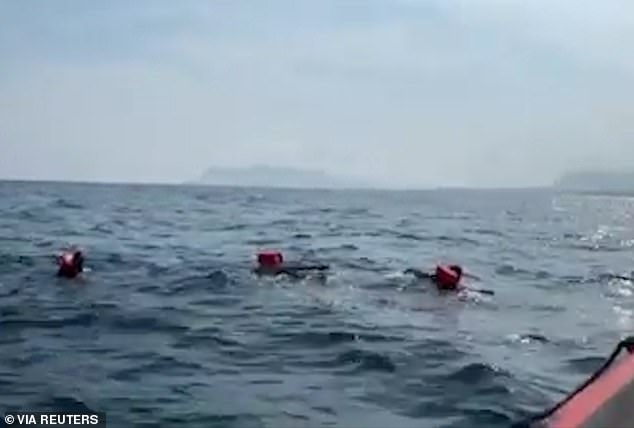 The Italian coastguard has ferried two pregnant women and one of their husbands onto dry land in recent days, while the rest remain on board.

So far this year 47,379 migrants have arrived by sea into Italy, Greece, Spain, Cyprus and Malta.

Another 4,837 have made the crossing into Greece and Spain via land.

The United Nations estimates that around 500 migrants have died or gone missing attempting to make the crossing in 2020.

The figures are similar to the last few years but a sharp drop off from the peak of the crisis in 2015 when more than a million arrived through the Mediterranean. An estimated 3,771 died or went missing that year. 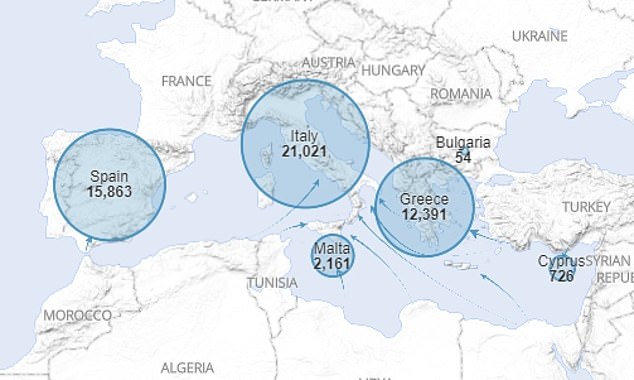 Data from the United Nations shows that so far this year 47,379 migrants have arrived by sea into Italy, Greece, Spain, Cyprus and Malta

After being for years the primary route into Europe for hundreds of thousands of asylum seekers and other migrants, Italy has seen a drop in arrivals after a crackdown on smuggling networks.

However, numbers have picked up again in 2020 although Rome banned rescue ships from docking in its ports due to the COVID-19 pandemic.

Sometimes those saved at sea are transferred to ferries and quarantined there, off the Italian coast.

At least 50 people are thought to have died when a gold mine collapsed near Kamituga in the east of the Democratic Republic of Congo, a local mining NGO says.

The cave-in occurred on the Detroit mine site on Friday afternoon (local time) following heavy rains, said Emiliane Itongwa, president of the Initiative of Support and Social Supervision of Women.

“Several miners were in the shaft which was covered and no one could get out. We are talking about 50 young people,” she said.

Photos and videos on social media showed hundreds of people, some of whom could be heard wailing on a hillside around the mine-shaft entrance.

The mine was not located on the Kamituga gold concession owned by Canadian miner Banro Corporation, the company’s chief executive said.

Mining accidents are common in unregulated mines in Congo, with dozens of deaths every year in mines where often ill-equipped diggers burrow deep underground.

A landslide at a disused gold mine killed 16 in October last year, while 43 illegal miners died in another landslide at a copper and cobalt mine in June 2019.