Myanmar’s leader Aung San Suu Kyi and other senior figures from the ruling party were detained in an early morning raid on Monday.The move came after Myanmar’s powerful military triggered concerns about a coup last week after threatening to “take action” over alleged fraud in a November election won by Suu Kyi’s National League for Democracy (NLD).The NLD led by Suu Kyi, a former political prisoner and figurehead of Myanmar’s long struggle against dictatorship, won 83 per cent of available…

Thank you for visiting My Local Pages and checking this news article on the latest Asian news items called “Aung San Suu Kyi, her NLD party and the Myanmar military that staged the coup”. This news update is brought to you by My Local Pages Australia as part of our national news services.

YANGON — Myanmar citizens voted to choose their leaders for the next five years in an election on Sunday.

The polls mark the second general election for the National League for Democracy, led by State Counselor Aung San Suu Kyi, under the current constitution. The NLD won a landslide last time in 2015, before taking the reins of government the following year.

Now, the party hopes to maintain a two-thirds majority, with roughly 500 seats up for grabs across the lower and upper houses of parliament. Reaching that threshold is crucial because the constitution allows the military to appoint the remaining 25% of the seats in both chambers. In a joint session after the lawmakers are elected — the vote counting could take days — the two houses will select the president.

This year’s election comes at a time when the coronavirus is battering the economy — especially the tourism and garment industries, which are the country’s main sources of hard currency. Large campaign rallies were banned and the opposition parties, as well as the military, criticized the decision to hold the election at all during the pandemic.

8:00 p.m. No official results have been announced yet. An NLD spokesperson comes out of the headquarters in Yangon and tells supporters to be patient and wait for the outcome at home.

That’s it for today. We will keep posting if there are any major developments.

7:15 p.m. Wai Wai, a 45-year-old from Shwe Go Daing township, joined other NLD supporters with her family in front of the party’s headquarters. She says: “I completely support the NLD and trust ‘Mother Suu.’ The NLD will definitely win the election.”

7:10 p.m. Hundreds of people have gathered around the NLD headquarters in central Yangon, expecting that Aung San Suu Kyi’s party has scored a decisive victory. Supporters are are waving the NLD flag and chanting.

6:30 p.m. Local media reports say that Aung San Suu Kyi and President Win Myint are both leading in their constituencies in the preliminary count.

Electoral workers count ballots in Yangon after the polls closed on Nov. 8. (Photo by Yuichi Nitta)

4:00 p.m. Voting officially ends, but citizens who are already in line can wait until their turn comes. Counting starts inside the polling stations, beginning with the advance ballots. Observers from each party are watching the process.

3:16 p.m. The Democracy and Human Rights Party, which represents the Rohingya minority, issues a statement saying it is “utterly disappointed” that many Rohingya people were not able to participate in the election. It calls on the government to “eradicate all unjust policies” affecting the Muslim group.

3:00 p.m. Local media reports that a woman alleged to be a representative of a Union Solidarity and Development Party candidate was arrested in a village in Mon State. According to the reports, she had fake ballots in her bag. 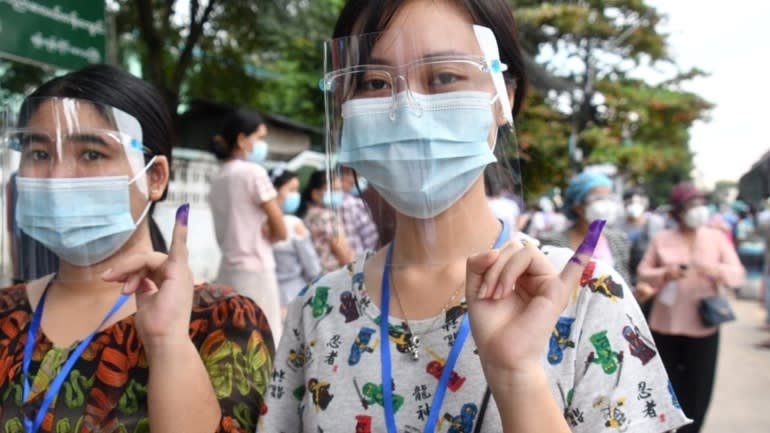 Voters show their inked fingers at the polling station in Yangon. (Photo by Yuichi Nitta)

2:45 p.m. The largest election observing organization in Myanmar, the People’s Alliance for Credible Elections, says 5% of its monitors have been unable to perform their duties because polling station officers stood in the way. According to PACE, 15% of registered voters cast their ballots in advance.

In this video footage, voters can be seen waiting to make their picks in Yangon.

1:55 p.m. Despite the overall popularity of the NLD, especially among the Bamar people, in ethnic states the sentiment is different. In Myitkyina, the capital of Kachin State, a 59-year old woman says she voted for the first time in her life — with local interests at the front of her mind. “I want to choose our leader by myself,” she says. “I just voted for someone who could build peace and work for the economy of Kachin State.”

In Kachin, several local parties merged to form the Kachin State People’s Party. Disappointment toward the NLD among ethnic groups has deepened due to the failure to seal peace agreements. A voter shows her finger at a polling station in Myitkyina, Kachin State, on Nov. 8. (Photo by Hkaw Myaw)

12:44 p.m. Like their urban counterparts, citizens in rural areas are also enthusiastic about participating in Myanmar’s fledgling democratic process. In Myaungmya, west of Yangon, Than Than Oo, a 44-year-old homemaker, says: “We are afraid of COVID-19, but everyone should vote. I hope there will be more change in education, business and the health sector.”

She adds, “I believe only the NLD can make changes.” Voters line up at a polling station in Myaungmya, in the Ayeyarwady Region, on Nov. 8. (Photo by Aung Aung Oo)

11:00 a.m. Foreign election observers are in the country to secure fairness. Yohei Sasakawa, head of an observer mission from Japan, says: “I am impressed seeing the voters so serious about casting their votes. Polling stations are well-managed despite the pandemic.”

On the other hand, in dozens of rural constituencies, the Union Election Commission decided to postpone the voting due to “security reasons.” Sasakawa says he met with UEC officials on Friday and “requested that they set up by-elections as soon as possible.” Yohei Sasakawa, right, and other members of Japan’s election observer mission visit a polling station in Yangon on Nov. 8.

10:00 a.m. Local media reports that Senior Gen. Min Aung Hlaing has cast his vote in the capital, Naypyitaw. The head of the military, who has extraordinary political influence, said: “I voted for the party that can work with the military,” adding, “I will accept the results of the elections. We can’t deny it.”

Besides the 25% of military-appointed seats, the largest opposition party, the Union Solidarity and Development Party, is affiliated with the armed forces.

Last Monday, Min Aung Hlaing’s office had issued a statement criticizing the Union Election Commission. “There are announcements [by the UEC] under the pretext of protecting voting rights, but that goes beyond the existing laws,” it said. The chief of Myanmar’s military, Senior Gen. Min Aung Hlaing, casts his ballot at a polling station in Naypyitaw on Nov. 8.

9:22 a.m. Our reporters in Yangon are hearing from many voters that they support the NLD, as expected. Aye Tun, a 57-year-old taxi driver in the city, says: “During the last five years, we have gotten the chance to talk about our difficulties. I am satisfied with it.”

Tin Htoo Aung, a 50-year-old street vendor, tells us: “I feel the NLD didn’t fulfill our hopes, but I still believe the NLD stands for the minority people. I voted for them to give them another chance.” 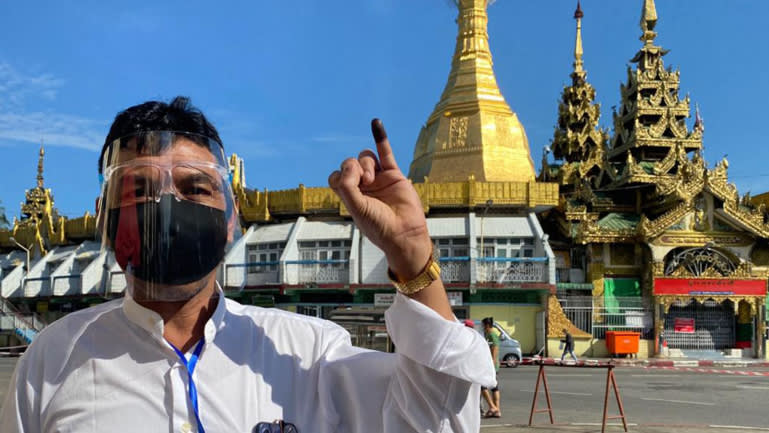 A voter shows his inked finger in front of a pagoda in Yangon on Nov. 8. (Photo by Yuichi Nitta)

8:45 a.m. To prevent coronavirus infections, polling stations in Yangon are implementing precautions, such as taking temperatures and asking voters to sanitize their hands. In some places, masks and face shields are being distributed. The country has recorded over 60,000 COVID-19 cases in the pandemic so far, with nearly 1,400 deaths. A staff member checks voters’ temperatures at a polling station in Yangon on Nov. 8. (Nikkei photo)

6:30 a.m. At a polling station in Yangon, a 39-year-old bakery owner accompanied by his wife says: “We believe that the NLD will do the best for education. We hope the government improves the next generation in the next five years.”

6:00 a.m. Voting starts. Citizens aged 18 and up are casting their ballots for parliament’s upper and lower houses. Voters wait for a polling station to open in Yangon on Nov. 8. (Photo by Yuichi Nitta)

5:47 a.m. Voters line up before the sun comes up, waiting for Yangon polling stations to open. A 45-year-old homemaker, Hla Myaing, says she hopes “the party I vote for will do their best for the next five years.”