President Donald Trump mocked Barack Obama‘s return to the campaign trail on Tuesday by reviving an old claim – that his inauguration had a larger audience than the former president’s – and pointing out that he won in 2016 despite Obama’s campaigning for Hillary Clinton.

Trump fired back at Obama at a campaign rally in Gastonia, North Carolina, taking the stage about an hour after his predecessor delivered a blistering attack on his presidency during a campaign rally for Joe Biden in Philadelphia.

He attacked Obama for not originally supporting Biden, which could have been a reference to reports Obama favored Clinton in 2016 or that Obama refused to endorse in the 2020 Democratic primary until there was a clear winner, which is a standard practice for former presidents.

He pointed out Obama campaigned multiple times for Clinton during the 2016 campaign – a contest Trump won.

‘There was nobody that campaigned harder for Crooked Hillary Clinton than Obama,’ Trump said. ‘He was all over the place.’ 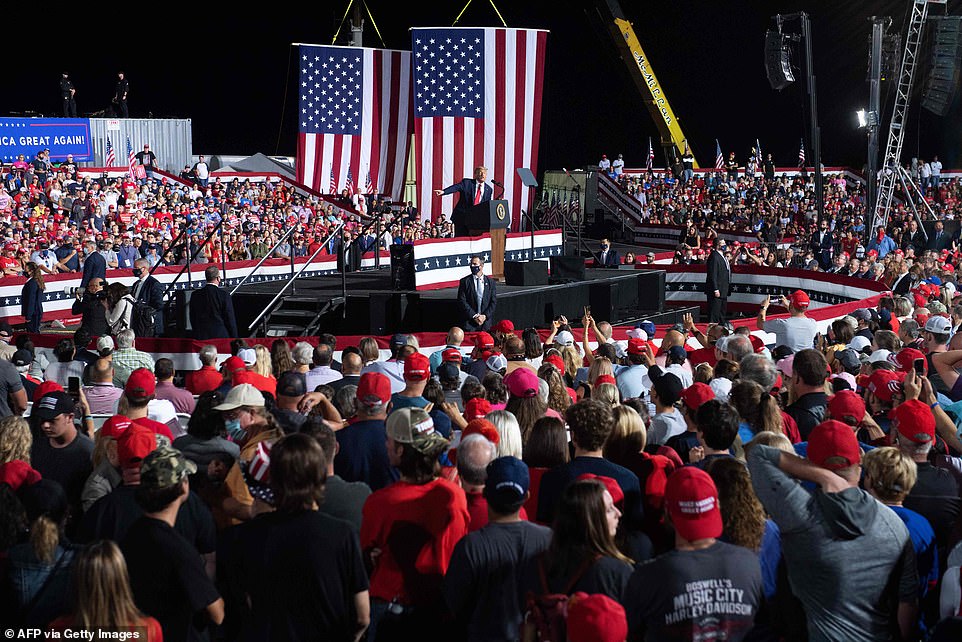 President Trump also said he’d better win the critical state of North Carolina on November 3: ‘I’ve been all over your state. You better let me win’ 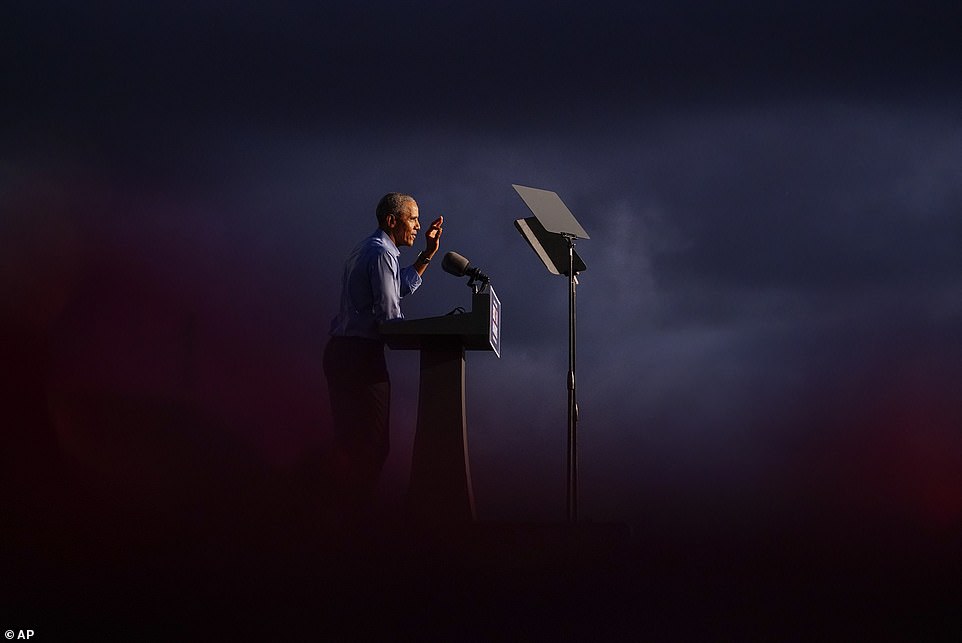 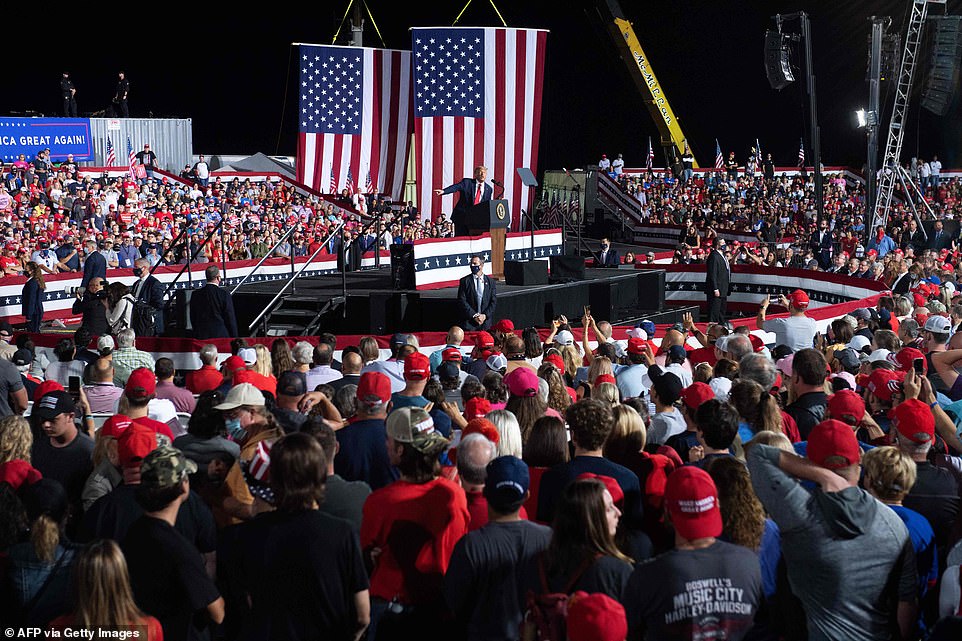 US President Donald Trump addresses supporters during a Make America Great Again rally as he campaigns in Gastonia, North Carolina 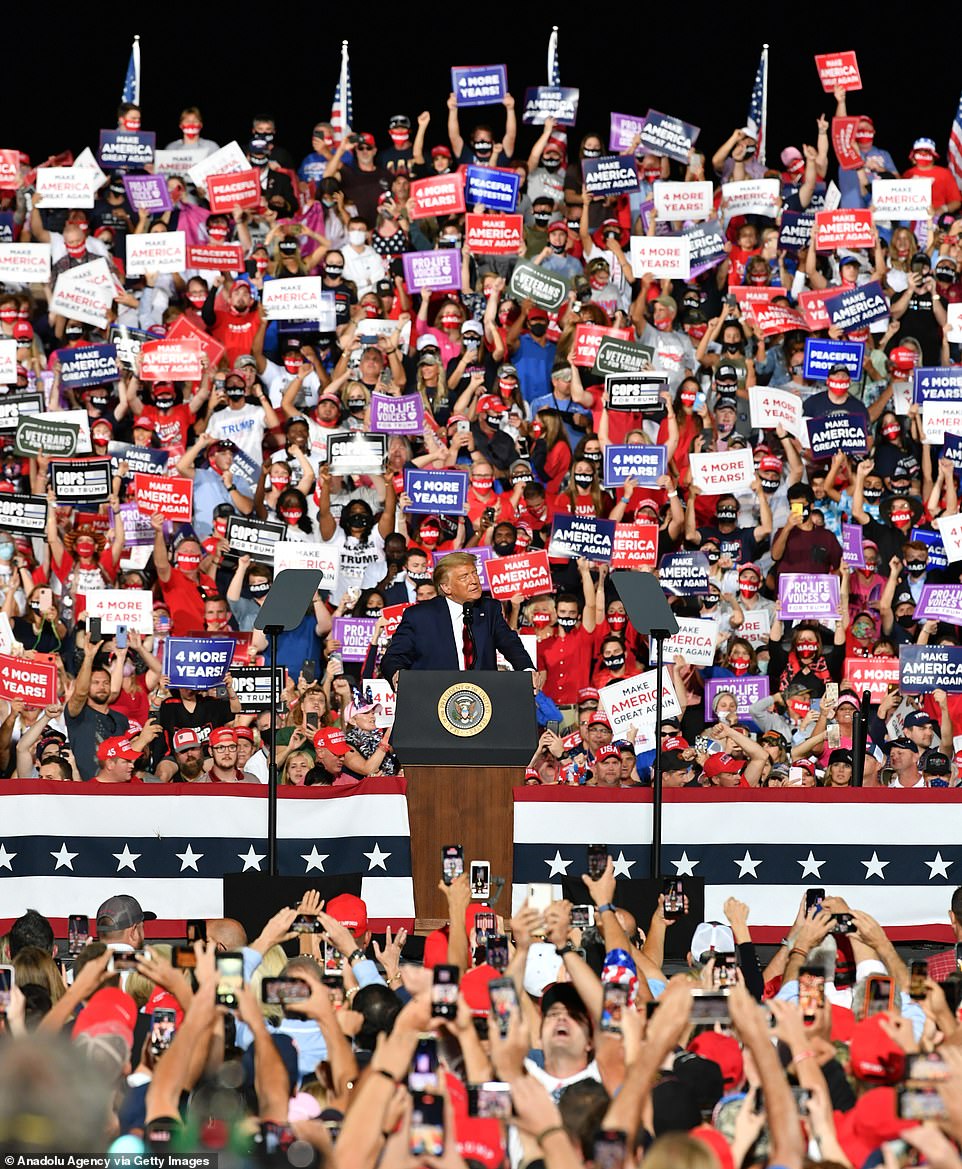 Trump is surrounded by thousands of supporters in Gastonia, North Carolina, on Wednesday night for his MAGA rally 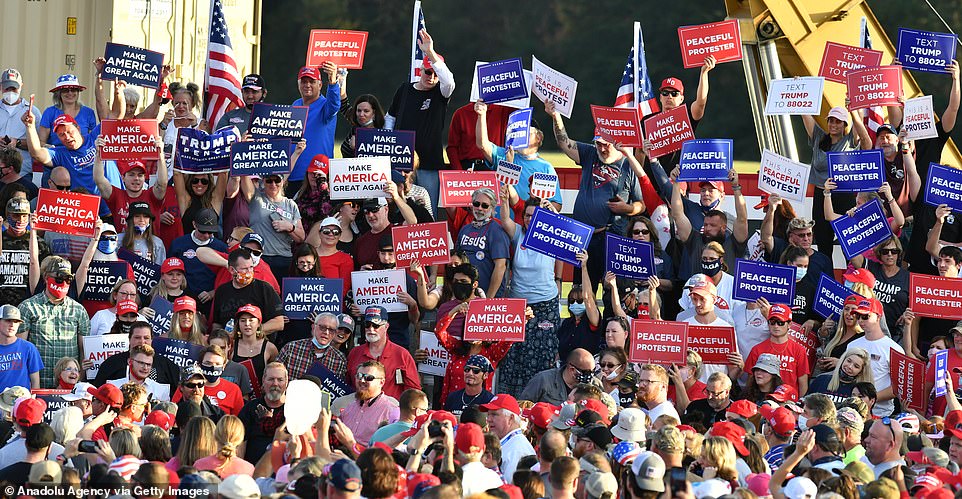 Thousands of Trump supporters packed into the airport in Gastonia, North Carolina, on Wednesday night

He told a mocking story about how Obama predicted Trump wouldn’t get the Republican nomination and then wouldn’t win the White House.

‘The only one more unhappy than Crooked Hillary that night was Barack Hussein Obama,’ Trump said in reference to election night in 2016.

The president also brought up one of his first arguments with Obama, saying the audience for his inauguration was even bigger and that the photo showing fewer people at his was actually taken after he was done speaking.

President Trump referred to the former president with his middle name in his attack, complaining when photos of the two events were shown side-by-side ‘they show empty space and they show Barack Hussein Obama’s.’

He argued his audience was bigger when ‘new things’ were included, believed to be a reference to online and streaming audiences.

‘I said, I think the word we used was audience that included all of the new things, you know, all of the different things,’ he said, adding: ‘I think we had the largest audience anywhere in the world.’

He said the photos shown of his event were taken five or six hours after his inaugural address.

‘They took the pictures about five or six hours,’ he said. ‘When I was speaking it was packed.’ 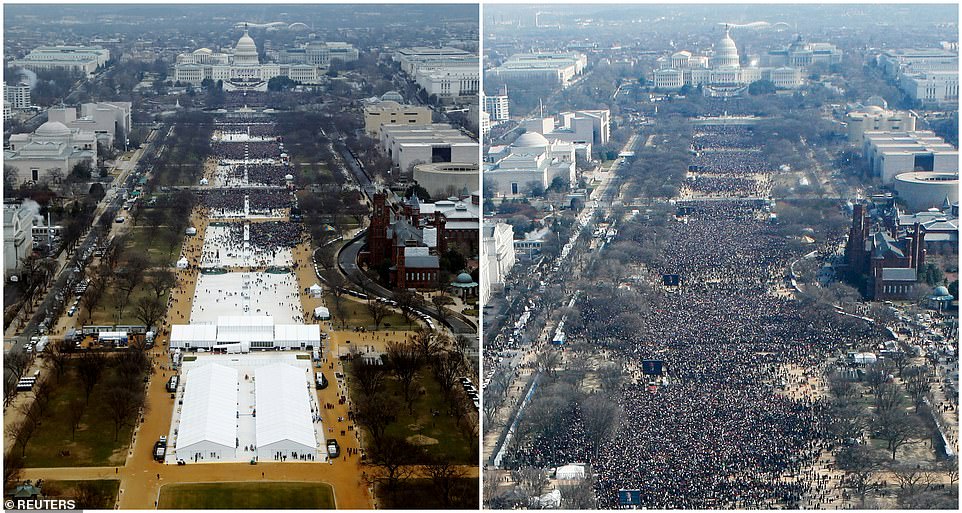 President Trump revived his argument he had a bigger inaugural audience – above is a combination of photos taken at the National Mall shows the crowds attending the inauguration ceremonies to swear in President Donald Trump at 12:01 pm (left) on January 20, 2017 and President Barack Obama on January 20, 2009 (right) 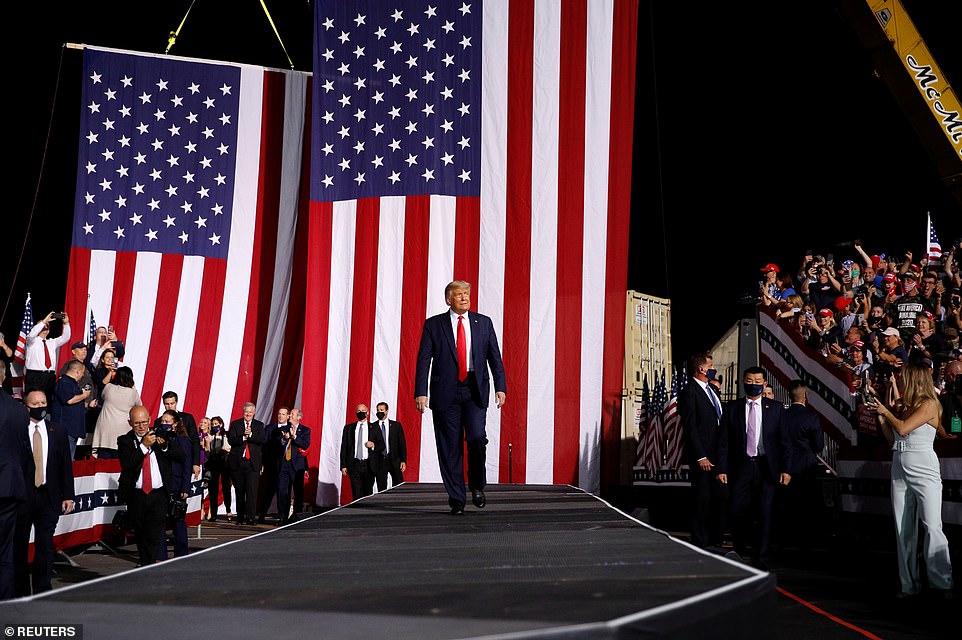 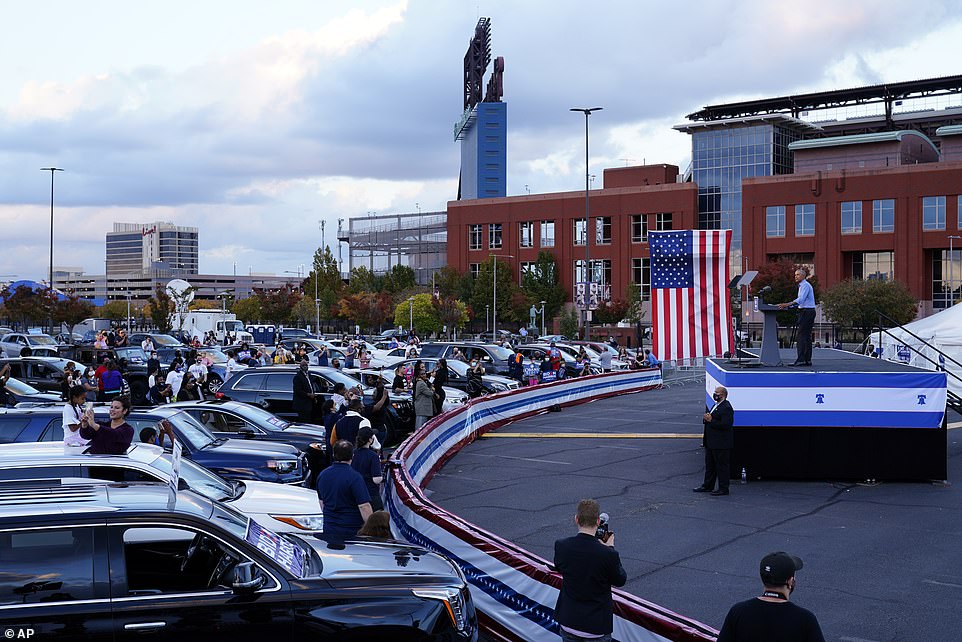 Abiding by social distancing protocols to prevent the spread of COVID-19, President Barack Obama’s speech in Philly was drive-in-style with supporters standing near or sitting in their cars 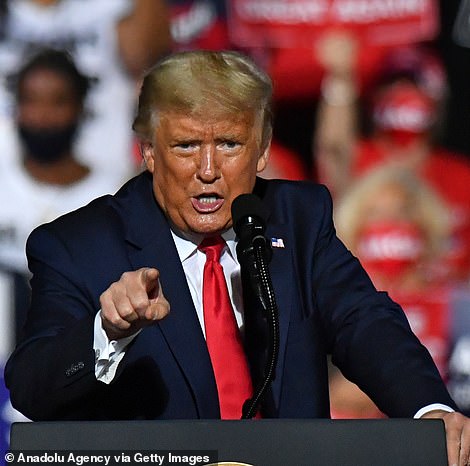 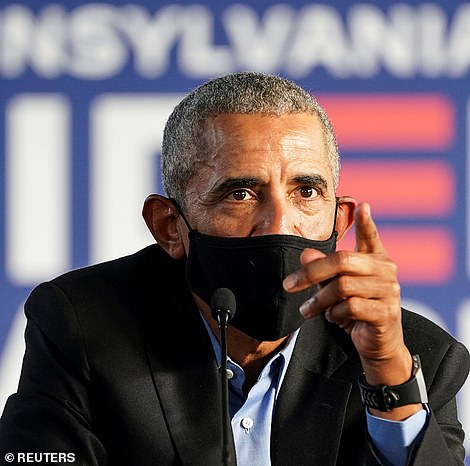 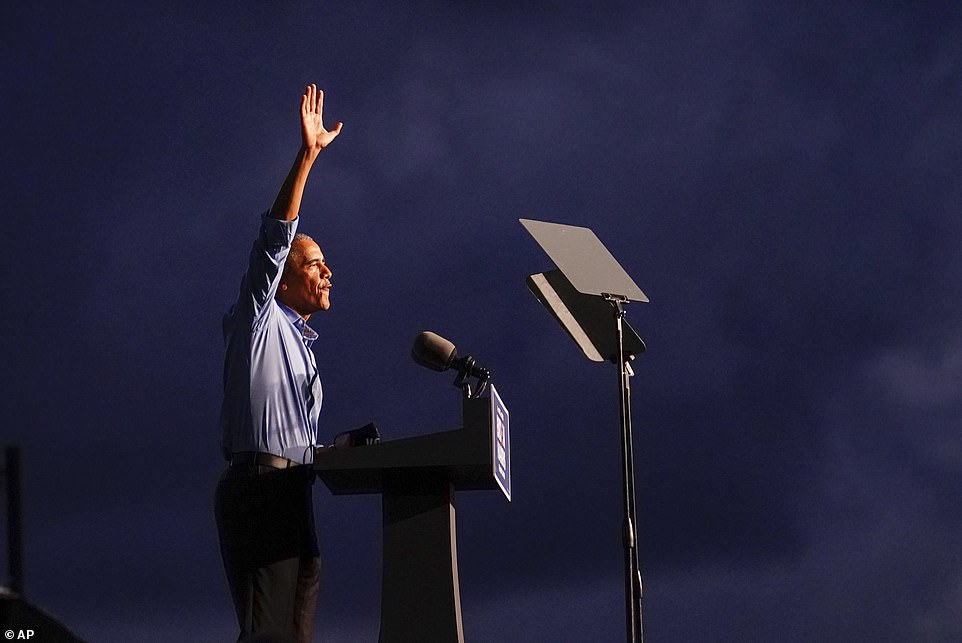 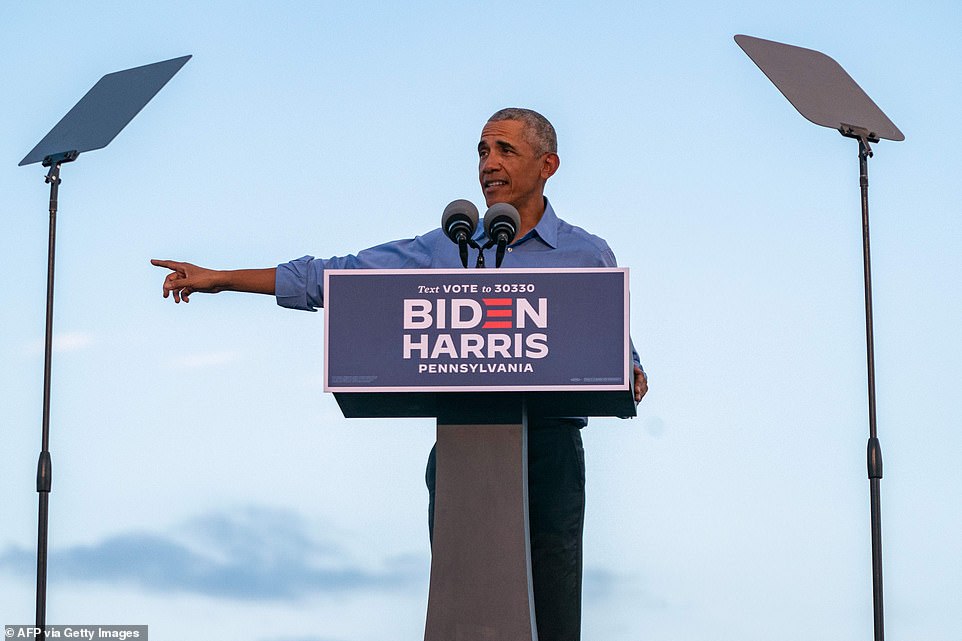 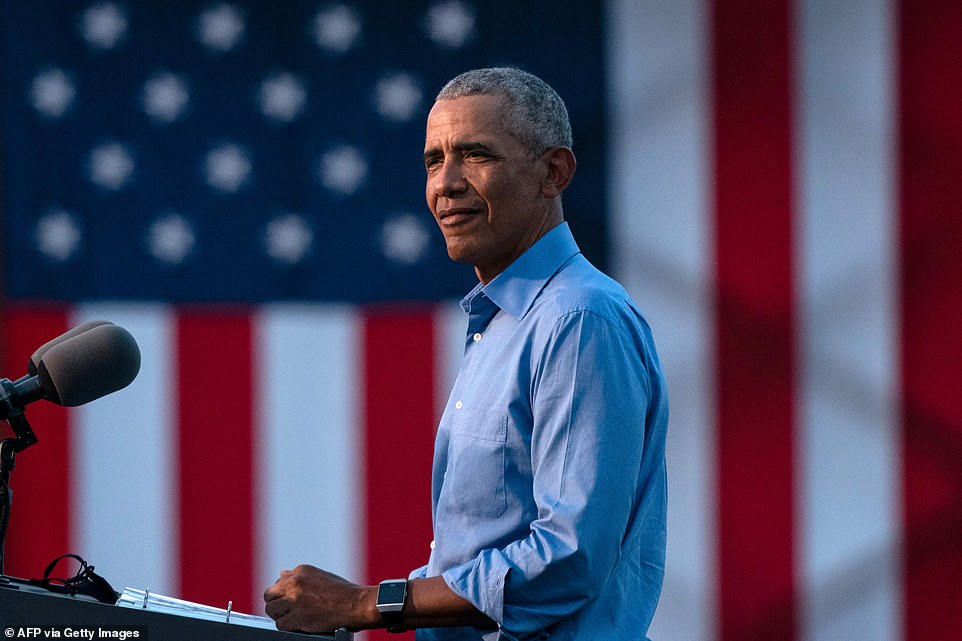 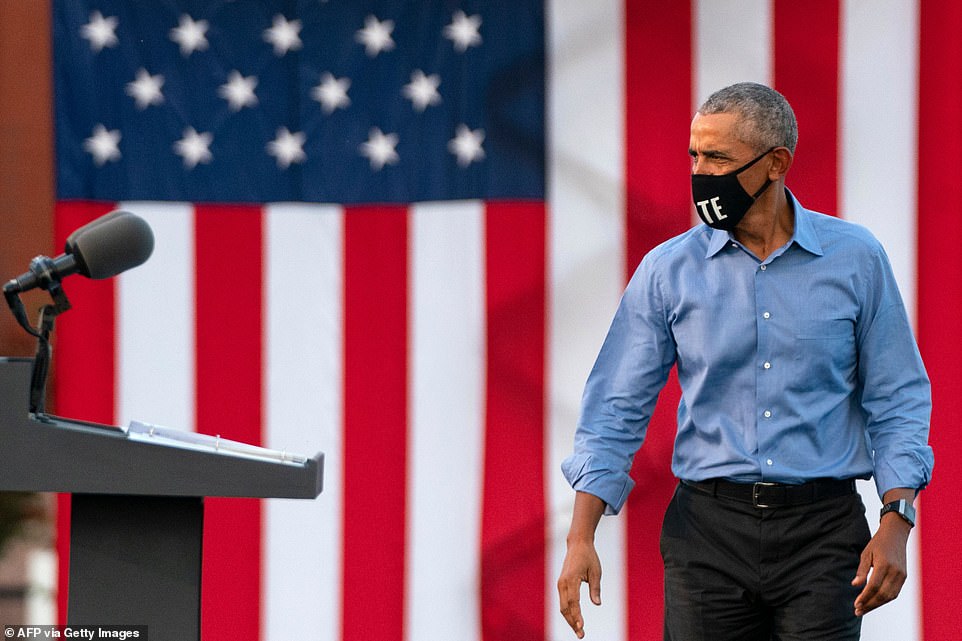 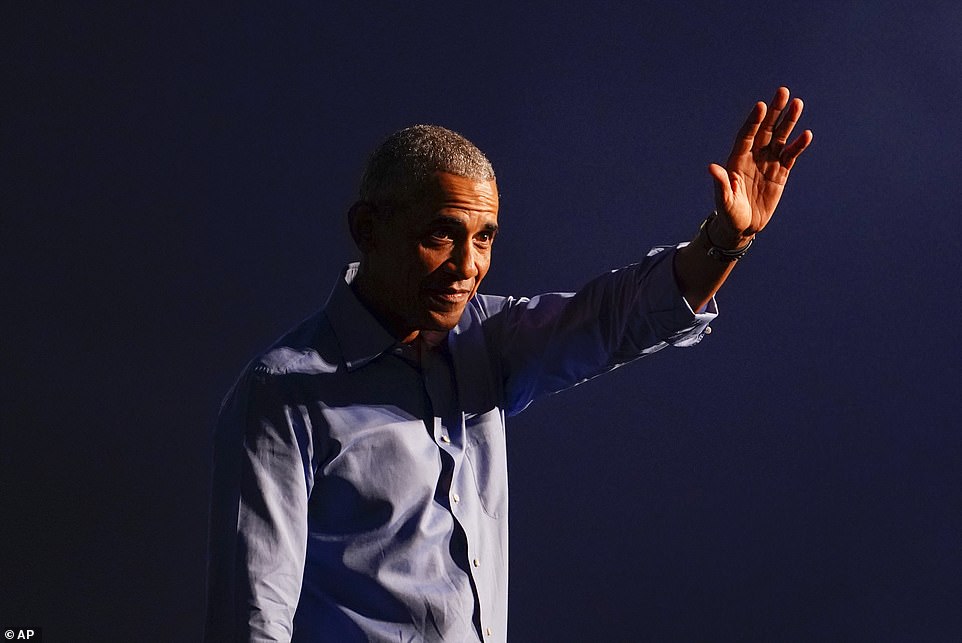 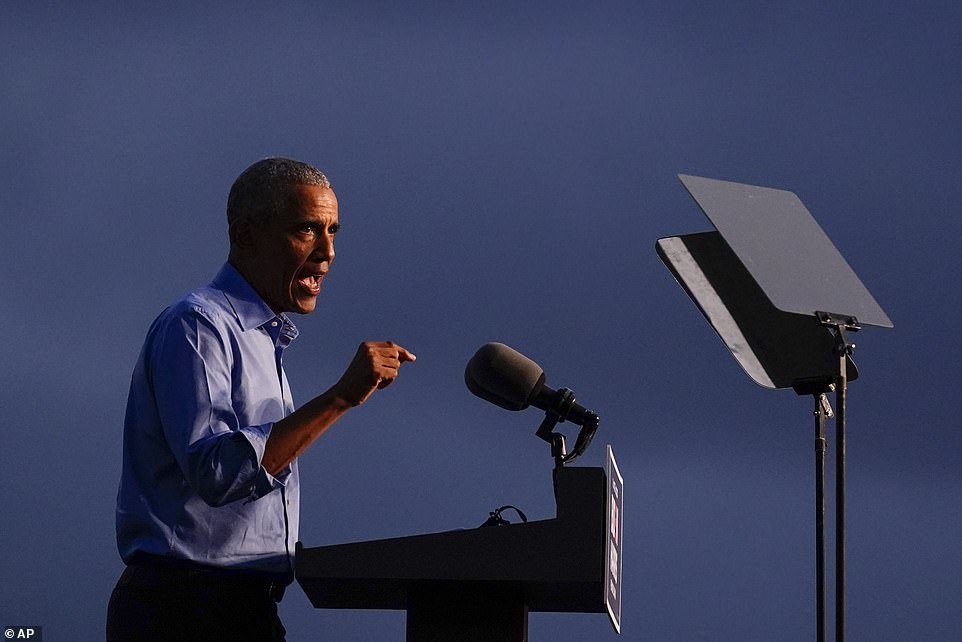 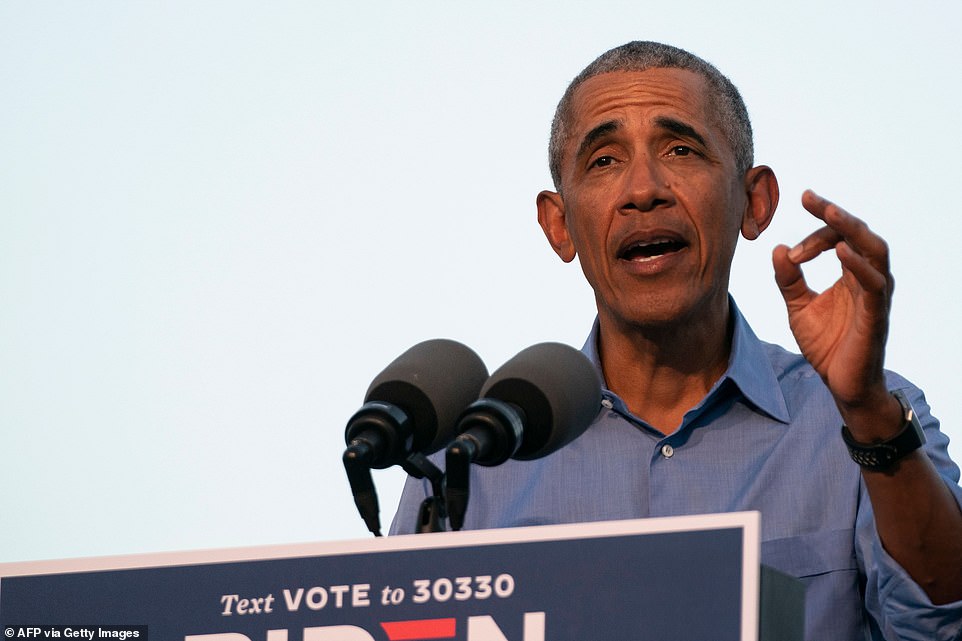 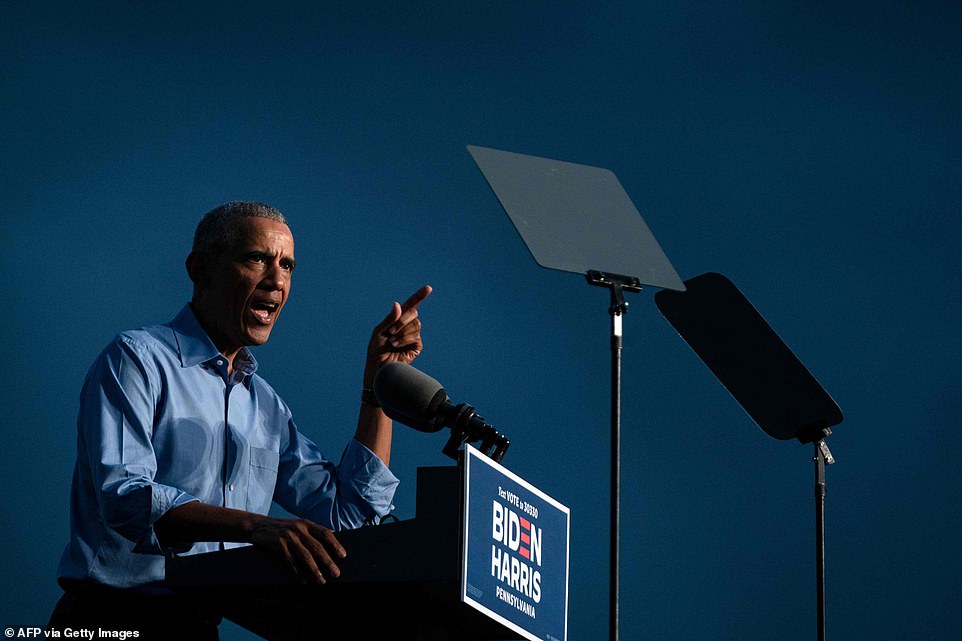 Obama addresses Biden-Harris supporters during a drive-in rally in Philadelphia, Pennsylvania, on Wednesday

However, time stamps on the photos showed by were taken at 12:01 pm on the respective inauguration days – the moment a president takes the oath of office.

Obama, making his first in-person campaign appearance for Biden on Wednesday, delivered a ferocious attack on Trump, calling him ‘crazy,’ accusing him of lying every day, and tweeting conspiracy theories.

It was Obama’s strongest critique yet of his successor in the Oval Office. He blasted Trump for both his policies and his rhetoric.

Trump didn’t just attack Obama, however. He also promised a ‘surprise’ for ’60 Minutes’ after he walked out of an interview with Lesley Stahl that taped at the White House on Tuesday.

‘We have a little surprise for 60 Minutes,’ he told the cheering crowd.

He didn’t give any hints but, on Tuesday evening, he threatened to post the entire interview online before CBS could air on Sunday night.

Trump indicated one of the question that made him angry.  He said Stahl questioned him about comment he made at a rally earlier in October, when he asked suburban women, a critical voting bloc who he won in 2016 but is struggling to woo this year, to like him.

‘She said, You are begging for women to love you. You said women Please love you,’ Trump claimed Stahl asked him.

At an October 14 rally in Pennsylvania, Trump said: ‘Suburban women, will you please like me? I saved your damn neighborhood.’

Trump vowed Tuesday that he would post portions of the program before its airtime on Sunday to show the ‘biased’ nature of Stahl’s interview, which the president abruptly ended after 45 minutes when faced with a tough line of questioning.

Instead of posting any clips Wednesday, the president shared several pictures, including one showing Stahl looking at a very large book of what Trump says are his accomplishments and work regarding healthcare since taking office. 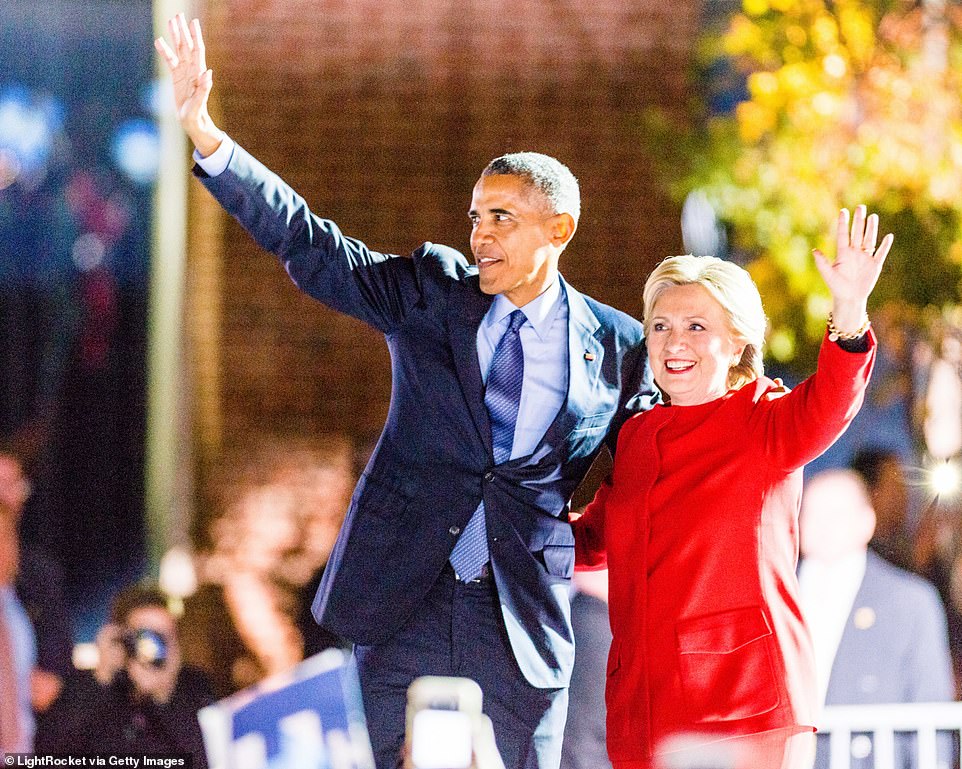 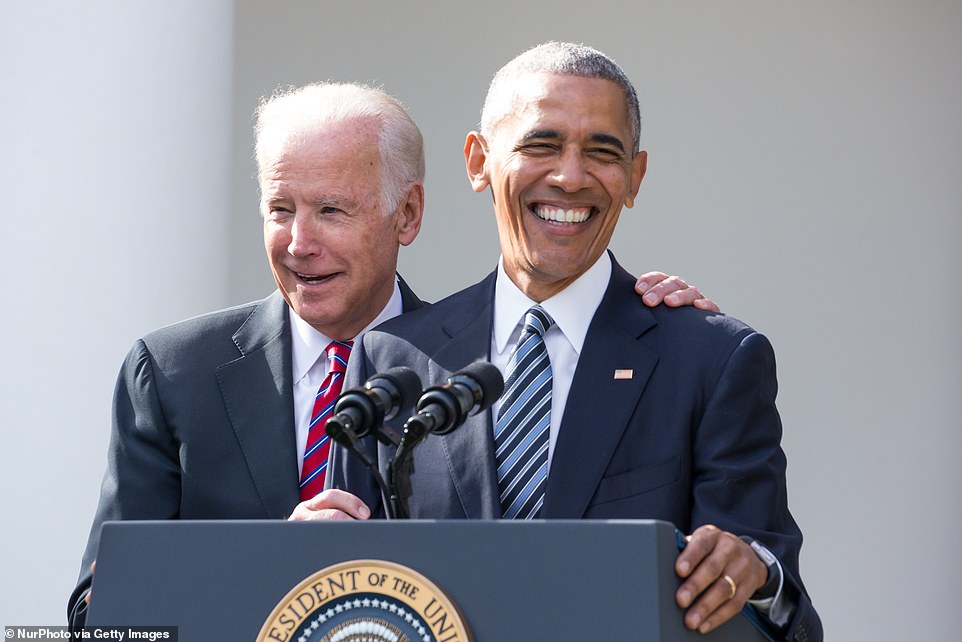 Then-President Obama with then Vice President Joe Biden, in November 2016 at the White House 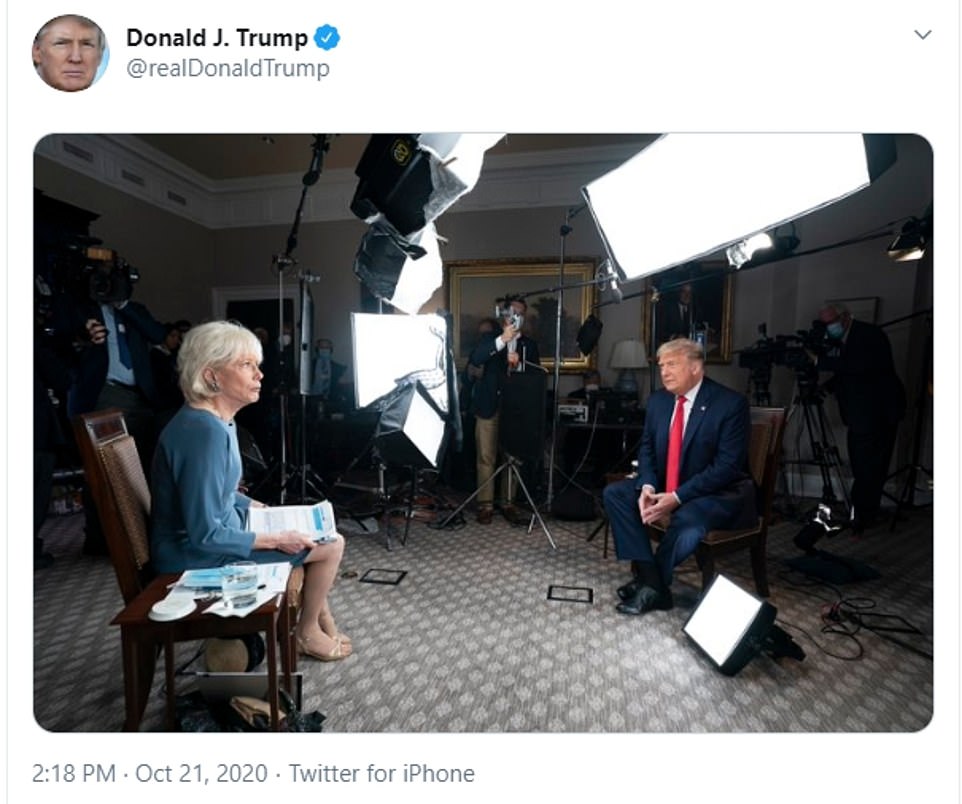 Trump has made several stops in North Carolina – and daughter Ivanka was there Tuesday – as polls show him trailing Biden but just barely. The Democratic nominee leads by 2 points in the RealClearPolitics average of North Carolina polls, well within the margin of error.

North Carolina is a critical state in the election. Kamala Harris campaigned for Team Biden in the state earlier Wednesday.

‘I’ve been all over your state. You better let me win,’ Trump told his rally Wednesday night.

In his one hour and 20 minutes speech, Trump listed the enemies that Trump says he fights ‘all by myself.’ The litany includes the media, tech giants, ‘the really stupid dumb people — the never Trumpers,’ ‘the rhinos that’s Republican in name only -Rhino, I love that,’ and especially ‘the deep staters.’

Trump also blasted Biden, repeating several of his charges that are red meat to supporters: that Biden will close schools and churches will taking their guns and destroying the economy.

‘This election is a choice between a Trump super recovery, or a Biden steep, depression, and that’s what you’re going to have,’ he said.

‘It’s between a Trump boom or a Biden lockdown,’ he added. 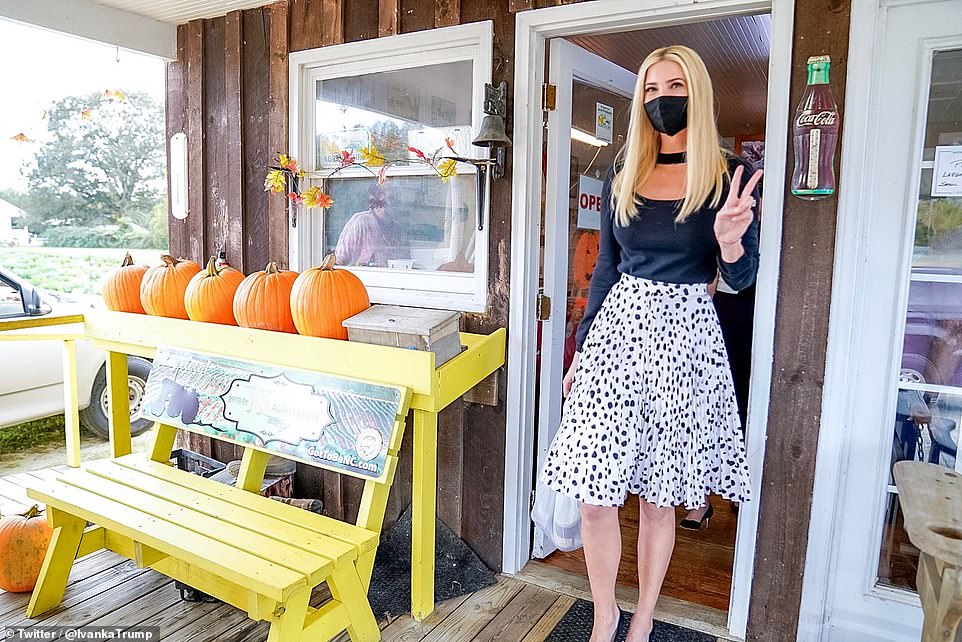 Ivanka Trump campaigned for her father in North Carolina on Tuesday 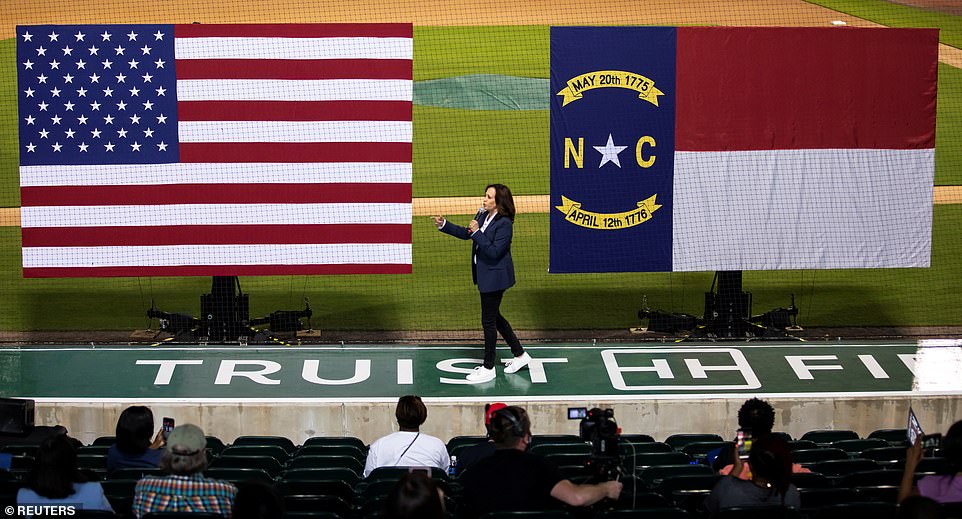 He again when after Biden’s son Hunter, bringing up the ‘laptop from hell’ as he called it. The laptop was found at a Wilmington repair shop and contained emails reportedly between Hunter Biden and Ukrainian officials and Chinese officials. Rudy Giuliani, Trump’s personal lawyer, gave a copy of the hard drive to the New York Post and the laptop is reported to be in the FBI’s hands.

‘Explosive emails from Hunter Biden also show that Hunter was negotiating with a Chinese are tied to the Communist China party to receive $10 million a year for introductions well that sounds reasonable I think you do that. I think I’d even do it,’ he said.

The ‘lock her up’ chant was one of Trump’s most popular in the 2016 campaign and was in reference to Hillary Clinton. Trump has brought in back in the past week to use it against the Bidens – both Joe and Hunter.

‘This laptop is a disaster. How the hell do he ever let go of this sucker. He got to have it fixed I guess he forgot to pick it up. What the hell?’ Trump said.

He then referenced a report that there were intelligence concerns the laptop was actually planted by the Russians to influence the 2020 election. 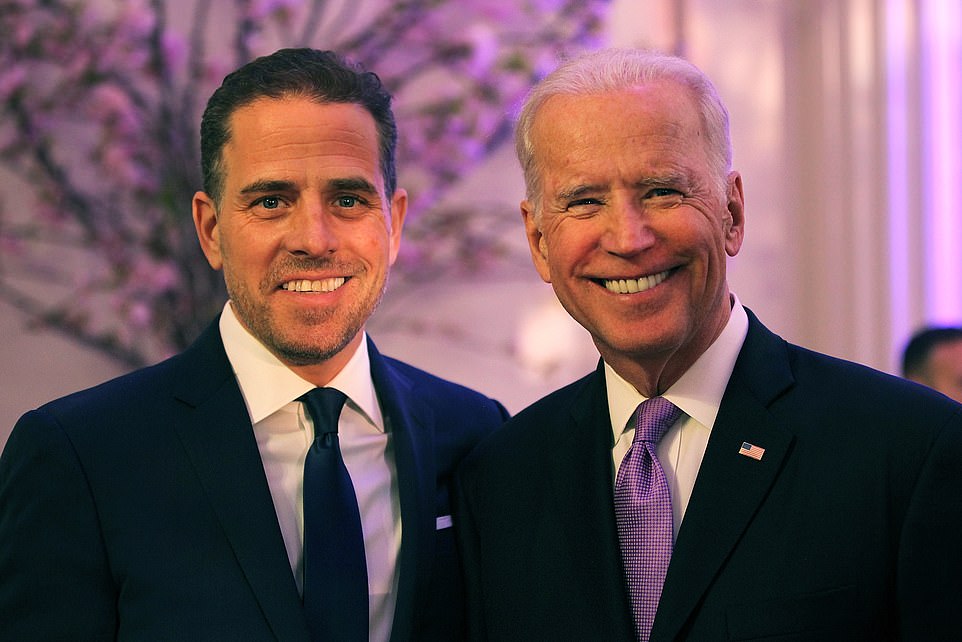 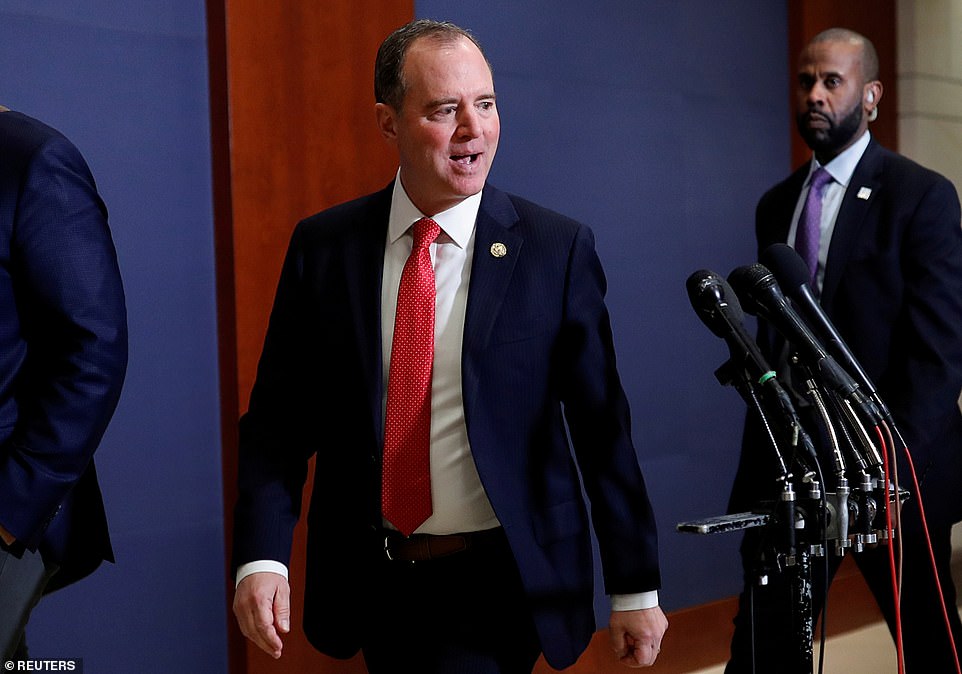 Trump also attacked Democratic Congressman Adam Schiff, the head of the House Intelligence Committee who led the impeachment investigation into Trump, calling him a ‘watermelon head’

‘Russia, ah Russia. They probably think we are the wackiest people,’ Trump said.

He also attacked Democratic Congressman Adam Schiff, the head of the House Intelligence Committee who led the impeachment investigation into Trump, calling him a ‘watermelon head.’

Trump blasted Schiff for going on television to voice concern that Russia was behind the laptop.

‘So Adam Schiff, this guy, the watermelon head,’ he said, going to say Schiff said ‘this was caused by Russia. Russia. Russia caused this, they created this.’

‘That guy should be locked up,’ Trump said of Schiff.

‘Lock him up, lock him up,’ the crowd shouted back.