When ideas about curfew and other forms of social control are bandied around, it’s worth reflecting on the lived experience of such measures of people in our town.

Between 1928 and 1964 effectively the whole of Alice Springs was a prohibited area for Aboriginal people between sunset and sunrise.

I’ve read about this before but its significance was driven home by some simple visual representations by Katy Moir, who describes herself as an artitect – trained as an architect, working mainly in the arts.

Her exhibition, A hypothetical Alice, has just concluded at Watch This Space. Maps of all sorts provided its foundations, with the most impactful for many being a series on prohibitions, both historic and speculative.

The first showed the extent of the boundaries defining the prohibited areas (below right). There were a number of iterations of the regulation (see the Central Land Council’s chronology here), including of its racially-defined basis – the ban initially extended to people of mixed descent, but their resistance led to their exemption from 1951.

The prohibitions finally ended with the repeal in 1964 of the Welfare Ordinance that had governed the lives of Aboriginal people of full descent – grown men and women, as well as children – as “wards’ of the state.

This late date puts the experience into living memory of today’s seniors, my age peers – people like Geoff Shaw, for instance, who gives an account of living under curfew in Every Hill Got a Story (pp 140-1): “All the growing up years I went to school with the mob that lived in town, but there was no going and staying with them on weekends or whatever.”

This obnoxious regime is part of the heritage of the whole town, but no doubt more keenly and painfully felt by those who lived under its control, their children and grandchildren.

Such detail wasn’t entered into by Moir; her point was more to get people living in the present town who may not have known this history or have forgotten or been only dimly aware of it, to see what such prohibition might look like in their own lives.

Two further maps in her series helped with this.

In one she drew an arbitrary boundary of 800m around a number of registered sacred sites in town – a list she sourced from a public document.

In the next, she blanked out everything within those overlapping areas (see above left) that would have to be removed or demolished if such boundaries represented exclusion zones like those Aboriginal people were subject to (although significantly smaller). There was not a lot left.

Most people found that map the most interesting, says Moir – they realised that their house would not exist anymore.

They were prompted to think about the town’s history but also about the sacred landscape as it exists today, ostensibly protected by legislation but constantly encroached upon by development.

A map of the area around Hele Crescent, adjacent to a sacred hill, showed how little “breathing space” is given to these places, with buildings packed tightly around the hill and the slopes at times cut into for concrete slabs and sheds. 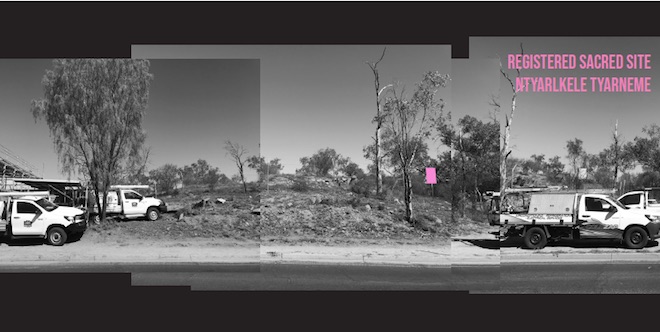 A similar point is made in one of her postcards (above) about the small sacred hill opposite the hospital on the western side and bounded by South Terrace to the east, part of Ntyarlkarle Tyaneme. The block next door (location of the head offices of the two regional councils) is presently a construction site.

There’s plenty of parking along the street, Moir points out, but contractors don’t hesitate to park their utes right up to the fence-line of the clearly identified sacred site.

But it’s not all bad, she says.

Alice Springs has developed with a lot more respect for the natural form of land than Darwin has, which is where she lives.

“It’s the biggest immediately obvious difference between the two cities,” she says.

“I don’t know how purposeful that was. Maybe it was because the ground was very hard and it would have taken a lot of effort to build on it.

“Also, there may not have been such a battle to get land. But maybe there was respect from some people.”

Whatever the case, she says it is great it has happened that way, it helps give the town its unique character.

Moir has lived in Darwin for the last six years and conducted a similar though longer and more in-depth project there earlier this year as an NT Creative in Residence, working with the Northern Territory Archives.

Over the last two years she has stopped working formally as an architect, partly out of the conviction that Darwin doesn’t need any more buildings. She’s still really interested in the built environment, however, particularly public spaces and how people experience them.

A project like A hypothetical Alice allows people to explore the possibilities without the pressure of imminent change, driven by big budgets and predetermined outcomes.

But sometimes the change is frustratingly upon us. 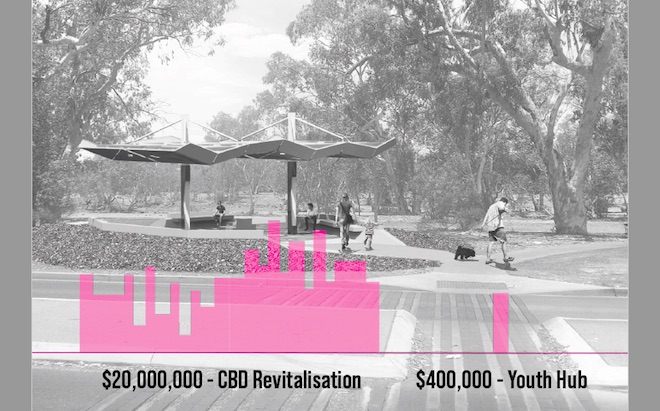 In an astute visualisation (above) Moir compared the $400,000 pledged to a youth hub – which now looks uncertain – with the $20m allocated for CBD revitalisation (a long time coming).

“These projects should be talking to one another. I don’t know how you couldn’t justify a youth hub as part of a CBD revitalisation,” she says.

In another visualisation, she suggests that a government-driven “activation” of a CBD location may be a pretext. This site of a soon-to-be-built heavily engineered shade structure is already shaded by tall trees and well used by people. Particularly Aboriginal people.

Her concern is that the structure may be mostly a cover for just how much CCTV is being put in around town, with no challenge to its effectiveness – it creates a perception that something is being done.

In Darwin, Moir concluded her project with 20 ideas for specific things that could be done in the city to create better ways for people to use and enjoy it.

She avoided doing that in Alice, in part because the project had a much shorter time frame (all up she spent six weeks here) but also because she doesn’t have lived experience of the town.

The principles behind her ideas for Darwin though are worth thinking about and taking into future conversations about Alice Springs. Most were about taking away things, or leaving things alone, or drawing attention to things already there, using them better.

This approach is not popular with governments who tend to want to build things but the end result can be far from felicitous (everyone will have their pet example(s) here).

A city plan is about the place its residents live in, Moir says. The conversations about that place’s future need to be had with them, exploring the past and also imagining what lies ahead.

In an interesting activity she asked participants in her project to spend three minutes writing about a fictional day in their life in 2030.

It was sobering to read the selection she displayed in the exhibition, with dread significantly outweighing hope. The dread arose not from the “antisocial behaviour” that dominates the present civic debate, but rather from the spectre of the town becoming unliveable due to the climate crisis.

The slender hope was that a newfound pride and communal spirit would emerge in town as the results of efforts, both local and global, to mitigate the impact of warming and limit its extent.

Whether in the coming summer or the coming decade, we’ll need informed and creative thinking to come to the fore. 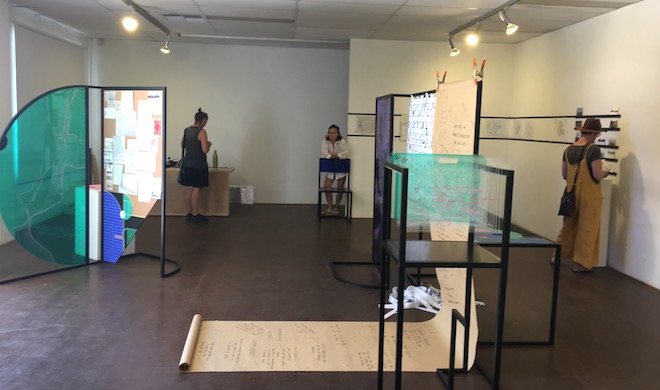