In less than thirty days of mutual obligations being re-instated after they were suspended due to the covid pandemic 74,434 payments have been suspended by Centrelink.

Estimates has revealed that 12,137 First Nations peoples, 6,334 single parents, 13,169 disabled people 9,100 homeless people and 12,135 culturally and linguistically diverse people are among those that have had a payment suspended within the first month of mutual obligations returning.

“There are very clearly vulnerable people who are disproportionately impacted by the punitive mutual obligations system,” Senator Rachel Siewert said.

I’m at a loss to understand how suspending a homeless person’s payment in the midst of a recession will help them find work.

These are cohorts that the Government should be providing additional support for, not punishing them for being on income support.

Having a payment suspended is an incredibly stressful thing for someone to go through, particularly if you are living below the poverty line for a long period of time, not to mention in the midst of a pandemic and recession.

For those who say it may have only been for a couple of days, they miss the point. It is incredibly stressful to be trying to navigate this system to be dealing with Centrelink and in some cases intimidating Employment Providers.

In the best of times this system causes anxiety and poor mental health and this is only exacerbated in the midst of a recession when so many people are living with such uncertainty in their lives.

The Government itself has recognised the problems with the suspension process and in December introducing a 48 hour period to reconnect before suspension occurs, in the meantime all these people have been suspended.

Greens Senator Rachel Siewert last week said that an estimates hearing was told that since the Federal Government’s mutual obligations were ratcheted up in September, job agencies had suspended the payments of 12,137 First National peoples, 12,135 culturally and linguistically diverse people, 13,169 people living with disability and 6,334 single parents.

The thousands of payment suspensions came amid soaring unemployment rates and a nation-wide recession.

On Monday, the Australian Council of Social Services (ACOSS) reported – as of December 7 – job seekers who missed a meeting with their job agent would have 48 hours to contact the provider before their payments were suspended.

“It seems a tiny victory, but in reality, this is huge – hundreds of thousands of people will be affected, and for the better,” AUWU said. 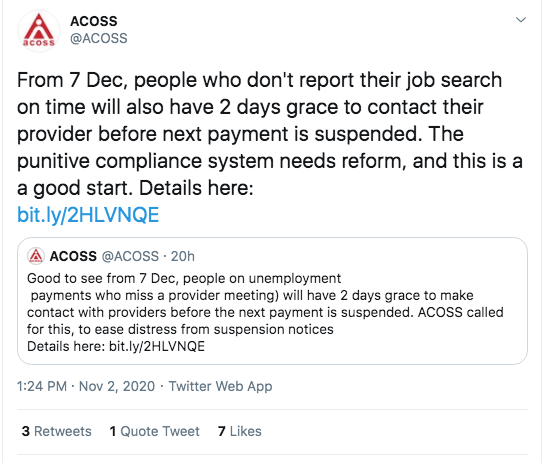 The Australian Council of Social Services welcomed the new measure.

Mutual obligations are a range of measures job seekers are required to meet in order to receive their low-income payments and include attending appointments with employment providers.

While mutual obligations were temporarily wound down during the pandemic, from July they were reintroduced in three stages.

As of September 28, job seekers could be punished, and have their payments temporarily cut, for not engaging with the privately-run job service providers and looking for a minimum of two jobs a week.

Job seekers in Victoria remain exempt from meeting mutual obligations due to the pandemic.

The figures tabled at Senate estimates last week showed a total of 74,434 welfare payments had been suspended between September and October.

Prior to the pandemic, job seekers were required to look for up to 20 jobs a month in order to receive their payments.

While the job-hunting requirements were less onerous than the pre-pandemic obligations, Siewert criticised “the punitive mutual obligations system” for disproportionately impacting vulnerable people.

I’m at a loss to understand how suspending a homeless person’s payment in the midst of a recession will help them find work.

“These are cohorts that the Government should be providing additional support for, not punishing them for being on income support,” she said.

“Having a payment suspended is an incredibly stressful thing for someone to go through, particularly if you are living below the poverty line for a long period of time, not to mention in the midst of a pandemic and recession.”

Siewert’s comments followed Anglicare’s Jobs Availability Snapshot report released last month which found nationally there were an average of eight people competing for each position at their skill level.

According to the Snapshot, the underemployment rate had increased by 47 per cent from May last year, while the number of people registered for the federal government’s Jobactive program more than doubled from 619,956 to 1,442,760.

A report released by think tank Per Capital in April estimated the Federal Government’s Jobactive program would cost Australia an additional $210 million – on top of the roughly $1.3 billion the nation forked out to outsource the service each year – as a result of the increase in unemployment due to the pandemic.

Mutual obligations have previously led to a number of inquiries, including a senate report last year which found people on the scheme were gaining employment “in spite of Jobactive not because of it”.

It followed an expert advisory panel report in 2018, which outlined a number of recommendations on how employment services could best assist job seekers and employers.

The recommendations included reflecting changes in the workforce, orientating resources towards improving outcomes for disadvantaged job seekers and improving the quality of services delivered by employment services. They are due to be introduced in 2022.

InDaily contacted Services Australia and was referred to the Department of Education, Skills and Employment.

Make a contribution to independent news

A donation of any size to InDaily goes directly to helping our journalists uncover the facts. South Australia needs more than one voice to guide it forward, and we’d truly appreciate your contribution. Please click below to donate to InDaily.

Tony Dennis of Holland Park West writes: “As my television is now saturated with advertisements for all the new phones I feel that, before buying, you should check the contract. Look what happened to Adam and Eve for not checking their Apple terms and conditions.”

“Finding a three-year-old copy of the Herald buried in a front hedge, I took a quick look for the sheer pleasure of not seeing any of the following: lockdown, social distancing, border closures, testing stations, travel bubble, PPE, face masks, hotel quarantine,” says Joan Brown of Orange. “What a strange world we inhabited back then.”

George Christie of Bexley says: “[I] didn’t get to see Shintaro (C8) at Sydney Stadium but think I can go one better. In the late ’60s, I was a nine-year-old in 3rd class at Redfern Public School. On the day in question, during lunchtime, out of nowhere, two ninjas in ‘bad guy’ black uniforms and my hero Tombei walked through the gate and stood in the middle of the playground. Without exaggeration, we all froze. They then started to throw rigid cardboard ninja stars throughout the playground. We, of course, went bonkers trying to catch them. They were printed with info promoting the oncoming visit of Shintaro to Sydney. I still recall the teacher on playground duty that day, Mr Spencer, quietly put a few of the stars in his pocket. Any others present that day?”

John Swanton of Coogee recalls, “Back in the ’80s, the original owner of Sushi Bar Rashai in Annandale had an autographed black-and-white photo of Shintaro on the wall, which I lusted after for years. When I asked how did he get it, he told me: ‘He came to my restaurant.’ Don’t anyone think of trying to steal it (if he is still there) or he might leap the counter with a very sharp sword.”

The elliptical answer (C8) explained by Simon Rice of Queens Park: “Elliptical, from ellipsis. The three dots at the end of a sentence. Indicating incomplete or unfinished. Leaving you wondering.”

Technological advancements in the past decade have redefined the way we live and work. Empowered by software, small businesses are evolving and have migrated key operations online, allowing them to provide sophisticated, streamlined services to their customers. The widespread adoption of cloud solutions – like instant messaging, video conferencing and CRM platforms – has allowed businesses to work remotely in a cost-effective manner, without their ability to serve their customers suffering. This has been especially imperative as small businesses continue to work remotely as a result of the pandemic.

While the convenience of technology is undeniable, it presents risks if not properly managed. As our reliance on smart devices and online applications increases and our personal data is being saved in more places online, cyberattacks across Australia are becoming more prevalent and more damaging. Considering the financial and reputational ramifications, ensuring your business and its employees are equipped with basic cyber awareness and data literacy is now more important than ever. If you’re a small business owner, here are some insights into why and how to protect your company’s cybersecurity.

With the rapid adoption of remote, internet-enabled work, threats to our businesses are changing and so, too, are the ways to protect them. While emptying the cash register, locking the door and switching on the CCTV would’ve been second nature, safeguarding their customers’ personal data – like payment information – from unscrupulous hackers must become equally as important. After all, if privacy obligations aren’t taken seriously, even a small attack can have serious consequences such as damaged reputation and loss of customers. Resolving these issues often carry high costs and can impede company growth.

No organisation is safe from a cyberattack, but small businesses are often more vulnerable for the simple fact that they lack the expertise or resources of bigger companies. Hackers act by finding a vulnerability in a system and exploiting it. There are a number of ways an attacker can gain access to a network, such as embedding their own code in a website or installing their own software to damage a system. However, there are also a number of ways your small business can implement safeguards that act as a stronger deterrent to hackers.

Action and education: Controlling your cybersecurity

Improving your defences against cyber attacks is about clearly defining policies, educating your employees with regular information sessions and implementing necessary protections. A simple protection, but often overlooked, is the importance of strong passwords across tools. Passwords are the first line of defence for any account and they should be secured at all costs. Mandating the use of only a few applications, with strong built-in privacy capabilities, is another effective way to help protect your business from cyber threats. Furthermore, investing in a VPN (Virtual Private Network) can also grant safe access to data while allowing employees to securely connect with the office network while adding an SSL certificate to your website can protect the data of those who visit it.

While preventative security policies are the priority, it’s essential to also have a reliable backup mechanism in the event that an attack does occur. Setting a periodic backup of daily tasks performed can safeguard your business and help to restore all critical data and continue business operations with minimum interruption.

In a time of uncertainty in which online risks are heightened, small businesses can no longer afford to ignore their cybersecurity obligations and must understand the potentially existential risks and how to mitigate them. But by staying informed and implementing protections, you can ensure your business, your employees and your customers stay safe.