KATHMANDU: China’s expansionist designs are going unchecked in Nepal as it is slowly and gradually encroaching Nepali land at multiple locations with the tacit support of the present dispensation headed by Prime Minister K P Sharma Oli.
According to a report by the Survey Department of Agriculture Ministry of Nepal, China has illegally occupied Nepali land at several places spread over seven border districts. The report stated Beijing is fast moving forward and further pushing Nepali boundaries by encroaching more and more landmass.
It is important to note that the data is being under-reported and the actual scenario could be worse as the Nepali Communist Party (NCP) is trying to shield the expansionist agenda of the Chinese Communist Party (CCP).
It is believed that China has made inroads into several other areas of Nepal, occupied land, and slowly progressing within the country. Prime Minister KP Oli government has preferred to keep mum over the ‘illegal occupation’ of the village by China under fears of displeasing the CCP.
The Nepali districts which are victims of China’s land-grabbing plan including Dolakha, Gorkha, Darchula, Humla, Sindhupalchowk, Sankhuwasabha and Rasuwa.
According to the surveying and mapping department of Nepal, China has pushed the international boundary 1,500 meters towards Nepal in Dolakha.
It has pushed the boundary pillar Number 57 in the Korlang area in Dolakha, which was previously located at top of Korlang.
The pillar has been an issue of confrontation between the two countries and China pressurised the Nepali government not to sign the fourth protocol on resolving and managing border disputes between the two countries as China wanted to maintain the status quo and further transgress the boundary arrangements.
The surveying and mapping department has also reported that China has occupied Nepali villages in Gorkha and Darchula districts. Similar to Dolakha, China has relocated Boundary Pillar Numbers 35, 37 and 38 in Gorkha district and Boundary Pillar Number 62 in Nampa Bhanjyang in Solukhumbu.
The first three pillars were located in Gorkha’s Rui village and areas of Tom River. Though Nepal’s official map shows the village as a part of Nepali territory and citizens of the village have been paying taxes to Nepal government, China had occupied the region and merged it with the Tibet Autonomous Region of China in 2017.
Similarly, the Human Rights Commission has reported that a portion of the Jiujiu Village of Darchula has also been occupied by China.
Numerous houses that used to be a part of Nepal have been now taken over by China and assimilated into the Chinese territory.
Besides the reports of land grabbing by the two Nepali agencies, the Ministry of Agriculture also recently came up with a report highlighting multiple cases of land grabbing by China.
The ministry reported about China’s occupation of Nepali land in at least 11 places falling under four Nepali districts. Most of the areas occupied in these districts are catchment areas of rivers, including areas of Bhagdare river in Humla, Karnali river, Sanjen river, and Lemde river in Rasuwa; Bhurjug river, Kharane river, and Jambu river in Sindhupalchowk, Bhotekoshi river and Samjug river in Sankhuwasabha; Kamkhola river and Arun river.
Nepal has refrained itself from going ahead with the border talks with China since 2005 as the Nepali government does not want to offend China by reclaiming Nepali land and at the same time dodge criticism at the domestic front for losing territory to China. The Nepali government has also suspended the 2012 border talks to save itself from getting into an indecisive situation.
In June, members of the opposition Nepali Congress moved a resolution in the House of Representatives, the lower house of the Nepalese Parliament, asking the Oli government to restore the country’s territory, which had been encroached upon by China.
The Nepali Congress lawmakers alleged that China had encroached 64 hectares of land in Dolakha, Humla, Sindhupalchowk, Sankhuwasabha, Gorkha and Rasuwa districts of the country.
They alleged that few of the total 98 boundary pillars along the 1414.88 km long border between Nepal and China had gone missing while several others had been shifted inside the territory of Nepal.
Recent reports have suggested that the Chinese Communist Party has been dominating the decision-making processes in Nepal.
The Chinese ambassador to Nepal recently played mediator to sort out differences between the Oli and Prachanda factions of the NCP.

New York Police Section officers cleared out “Occupy Metropolis Hall” protesters in the early hrs of July 22, dismantling an encampment that experienced been set up in Manhattan for practically a month, experiences explained. Protesters settled exterior of the New York Town Hall in late June with calls to defund the law enforcement division, neighborhood media documented. The NYPD cleared out the encampment “some time ahead of 4 am” on July 22, in accordance to studies. Protesters explained to area media that law enforcement “trashed” their tents, tarps, and possessions. This video clip reveals the emptied encampment place close to City Corridor, including tarps and graffiti masking the floor. The footage, filmed by 1010 WINS reporter Glenn Schuck, also exhibits a skirmish amongst police officers and one more person. At least seven folks ended up arrested as law enforcement cleared the region, an NYPD spokesperson advised area media. Credit score: Glenn Schuck 1010 WINS by means of Storyful 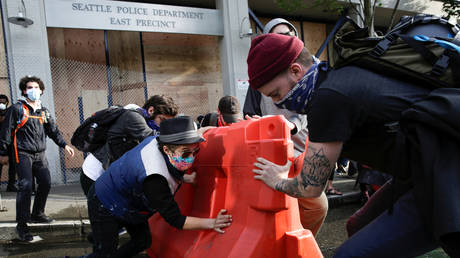 After police in Seattle, Washington retreated from the Capitol Hill neighborhood, protesters took over the abandoned ‘regime’ precinct and erected barricades to mark an ‘autonomous zone’ for several blocks around it.

Six blocks of downtown Seattle have been declared the ‘Free Capitol Hill Zone’ or ‘Capitol Hill Autonomous Zone’ (CHAZ), according to area activists that have taken control of Seattle PD’s East Precinct, on 12th Avenue and E. Pine Street.

Journalist Julio Rosas tweeted out photos from the ‘Zone,’ including flyers demanding that Seattle PD be defunded, and declaring that police “will always be racist because capitalism requires inequality.”

I’m outside of the Seattle Police Department’s East Precinct for @townhallcom. Police have pulled out of the area and protesters have set up barricades in the streets. They have declared it a “Cop Free Zone.” pic.twitter.com/iYFQ9B4jhz

Protesters have put on the barricades that those coming into the area are “now leaving the USA” and entering the “Cap Hill autonomous zone” or “Free Capitol Hill.” pic.twitter.com/zGNBYAyLOg

Journalist Andy Ngo described the group in control of the area as “Antifa,” and cited tweets to suggest there were armed guards among them.

Seattle @MayorJenny is allowing a dangerous situation to fester. #Antifa militants have taken over & created an “autonomous zone” in city w/their own rules. Police precinct abandoned. Antifa set up barricades to create a border. Calling for volunteers to provide armed guard. pic.twitter.com/ksQI4NI5kP

The report of armed personnel seems to have been confirmed by another activist, who said that members of the John Brown Gun Club – a leftist militia also known as Redneck Revolt – “showed up to offer help, some armed.”

Sympathizers have described the atmosphere inside the zone as “wonderful” and peaceful, more like a concert than anything else.

Pay attention to Seattle.After days of protest the police abandoned the center of town.What happened next? People set up barricades, bathrooms, handed out food + water.Police want you to think that without them there will be chaos. But what if without them there was peace?

Police Chief Carmen Best confirmed that her department evacuated the precinct on Monday evening as an exercise in “trust and deescalation.”

Two days earlier, Seattle PD used flash-bangs and pepper spray to push back demonstrators at 11th Avenue and Pine Street, just a block away, after they had moved a security barricade and allegedly threw objects at the officers. Protesters insisted that tear gas had been used, but police denied it, saying they had not violated the 30-day moratorium on the substance declared by Mayor Jenny Durkan, a Democrat.

City authorities may be expecting the activists to disperse, but the barricades and the content of their social media suggest they intend to stay. Local businesses and residents have “agreed to disaffiliate from Seattle basically,” in the words of one activist, who called it a “flux state in the making” – a reference to an anarchist commune from the fiction series Shadowrun.

Maps of the zone apparently made by the activists refer to ‘Captured Regime East Precinct’ and also use ‘regime’ to refer to reported police positions.

Democrats have ruled Seattle for almost 50 years. The current city council has eight Democrats and one socialist.