Two people have been criminally charged for the incident.

A former North Carolina police officer who was fired and criminally charged last year after he allegedly gathered a group of armed people and tried to enter the home of a Black teen who he thought was a suspect in the case of a missing person, has been sued by the victim’s family Tuesday.

Attorneys for Monica Shepard and her 18-year-old son Dameon filed the civil suit in North Carolina Tuesday contending that their clients were racially profiled and terrorized by former deputy Jordan Kita, and 14 other white defendants, some of whom were armed, who said they were looking for a missing woman.

Kita was off-duty but in uniform and had his sidearm when he came to the Shepard’s Pender County home on May 3, 2020, along with the group, according to the suit.

Kita told Dameon he was looking for a Black suspect with a different name than Dameon’s and tried to force himself into the home even though the teen repeatedly identified himself and said the suspect didn’t live in the address, the suit said. Monica Shepard eventually forced Kita out of the doorway and the crowd dispersed, according to the suit.

The missing girl was eventually found safe, according to the New Hanover and Pender County District Attorney’s office.

“When a dozen or more white men and women with guns invade a Black family’s property, terrorize the people that live there, and refuse to listen or leave, the situation can easily spiral into tragic and deadly racial violence and death,” Mark Dorosin, an attorney representing the Shepards, said in a statement to ABC News.

The New Hanover County Sheriff’s office fired Kita and prosecutors charged him with “forcible trespass, misdemeanor breaking and entering, and willful failure to discharge duties” for his role in the incident.

At least 13 other white men and women were part of the group, including Kita’s father Timothy, but none of those persons have been charged, according to the suit. Timothy Kita and a dozen “John and Jane Does” who were allegedly involved in the incident are also named as defendants in the lawsuit

The Shepards are seeking relief in excess of $25,000 and punitive damages that will be determined by a jury, the court document said.

An attorney who represents the Kitas did not immediately return messages for comment.

Another person charged following the incident was Robert Austin Wood, who was allegedly standing behind Kita and holding an assault rifle when the off-duty officer confronted Dameon at the door, according to the suit.

Wood, who is also a defendant in the suit, was charged with “going armed to the terror of the people,” by the DA’s office. Wood pleaded not guilty on Dec. 4, according to his attorney.

Woody White, an attorney representing Wood, said in a statement to ABC News that seeking damages from his client “over this huge misunderstanding is racial extortion.”

“Nothing bad befell the Shepard family; no racial slurs were used, no voices were raised, no threats were conveyed. It was a brief and seemingly uneventful misunderstanding that lasted less than 2 minutes last May,” White said in the statement.

The criminal cases against Kita and Wood are ongoing.

The suit also contends that the Pender County Sheriff’s Office did not do enough to investigate the mob or the incident.

A captain from the sheriff’s office allegedly did not attempt to question the members of the mob while they were outside the Shepard home and told the family the next day, “it was complicated to apprehend or arrest anyone who had been there the previous night,” the suit said.

A representative from the Pender County Sheriff’s office declined to comment about the suit.

“Experiencing this kind of terror at your home – the one place you should feel safe – is simply unconscionable,” Jennifer Nwachukwu, an attorney representing the Shepards, said in a statement. “We filed this lawsuit today to make it clear that Black people should not be subject to living in fear at the hands of an armed white mob without accountability.”

Thank you for seeing this news release about the latest USA News items called “Lawsuit filed after off-duty officer, ‘mob’ allegedly tried to force way into Black teen’s home”. This news release is presented by MyLocalPages as part of our national news services.

An off-duty conductor climbed out of the wreckage of a derailed ScotRail train and walked a mile to the nearest signal box to raise the alarm, it emerged last night.

The unnamed staff member managed to escape a carriage and run to alert operators after the service derailed on Wednesday morning close to Carmont Railway station, near Stonehaven.

Six others were rushed to hospital and four firefighters were injured while helping in the aftermath of the derailment.

Mobile phone signal in the area is notoriously bad and this is thought to be the main reason the off-duty employee had to walk to get help – prompting the railway authorities to immediately shut the line.

Transport Secretary Grant Shapps yesterday said he understood the conductor managed to escape the train and alert operators, while a member of the public raised the alarm having seen smoke billowing from the trees. 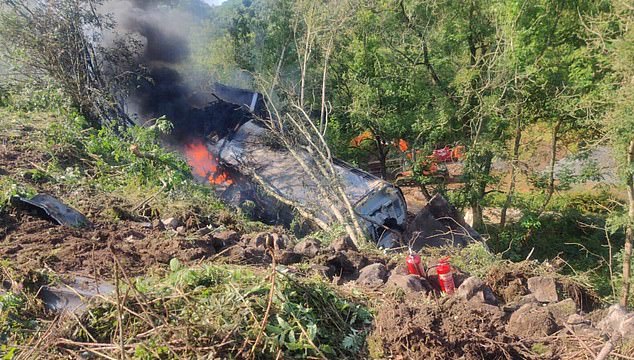 With the police notified around 9.40am, it was not long before the first responders were on the scene.

Police Constable Liam Mercer and a colleague received one of the earliest messages that something had happened on a ‘flood-hit’ line in Kincardineshire.

The PC spoke to and was praised by Mr Shapps, who visited the site of the train wreck to see the damage for himself.

Mr Shapps said: ‘PC Liam Mercer answered a call and along with a colleague were the first emergency responders.

‘He walked towards the scene and clearly being there first with that scene in front of you – he just said to me, his training kicked in right away.

‘He did not hesitate and got involved straight away and started helping people.

‘It’s extraordinary and humbling. And there are many others like him. I pay tribute to the brilliant work they have all done.’

Scottish Transport Secretary Michael Matheson, also on a visit to the derailment site, praised the ‘courage and determination’ of the off-duty conductor. 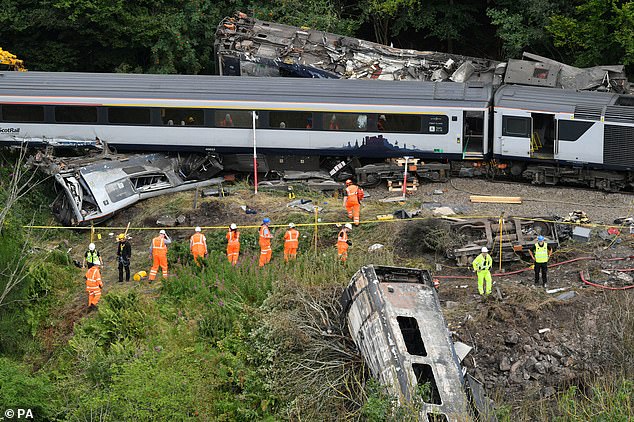 Three died and several others were also taken to hospital, including four firefighters who were injured while helping to deal with the derailment 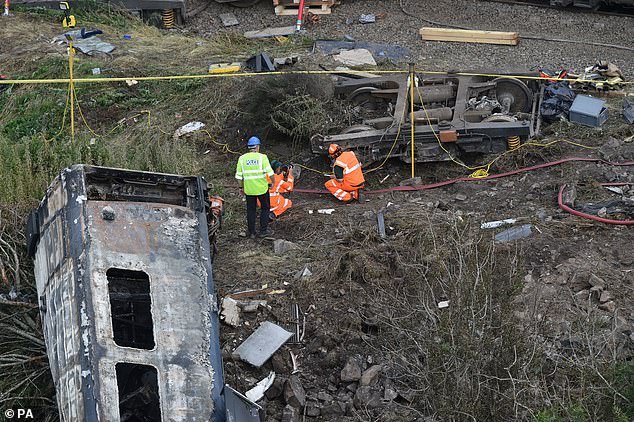 He said he too had been humbled by the response of the emergency services.

The train slipped from the tracks after hitting a landslip in the area, which had recently been hit by major flooding.

On Thursday, track operator Network Rail announced that engineers will carry out detailed inspections of dozens of high-risk trackside slopes with similar characteristics to the site of the Aberdeenshire crash.

Meanwhile, during his visit to the site, Mr Shapps claimed it was ‘far too soon’ to say whether cutbacks to Network Rail contributed to derailment.

His comments come as it was revealed National Rail had been warned about the network’s resilience to severe weather just four weeks before Wednesday’s derailment. 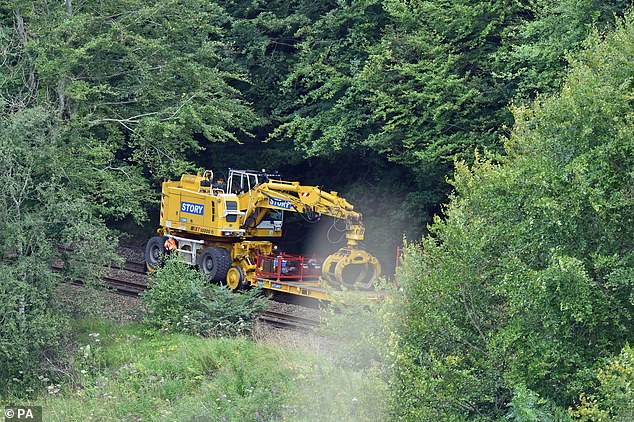 An annual health and safety report by rail safety watchdog, the Office of Rail and Road (ORR), said there were six times more flooding events on Britain’s railways in 2019-20 than during the previous 12 months 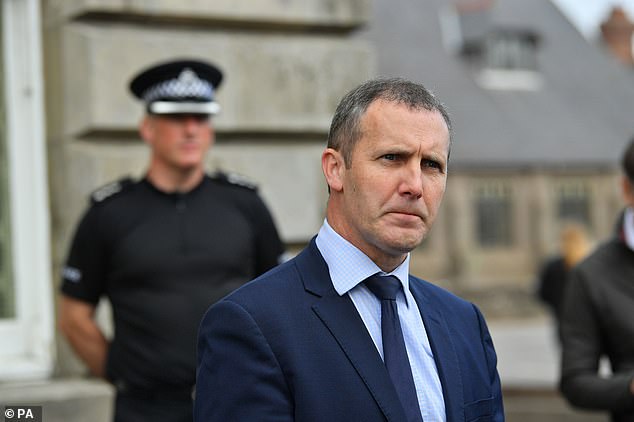 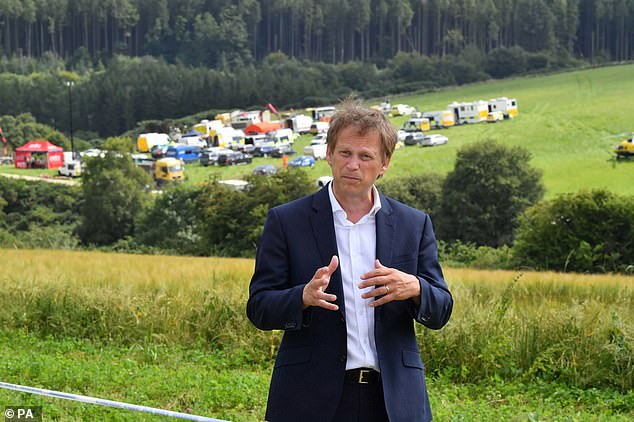 Transport Secretary Grant Shapps speaks to the media during a visit to the scene of the derailment near Stonehaven, Aberdeenshire

An annual health and safety report by rail safety watchdog, the Office of Rail and Road (ORR), said there were six times more flooding events on Britain’s railways in 2019-20 than during the previous 12 months.

It also noted a spike in landslips, demonstrating the ‘vulnerability’ of the network, and criticised Network Rail’s plans to address climate change and extreme weather, which it said were ‘not keeping up with the frequency and severity of these events’.

Speaking when the report was published last month, HM chief inspector of railways Ian Prosser said: ‘The last year saw significant increases in flooding, earthwork failures and trains striking trees on the line, which had a big impact on the number of delays on the network.

‘It is so important that the sector employs best practice if we are to meet all the pressures on the network in the future and to make sure the railway plays its full role on climate change and reducing carbon emissions.’

In its response, Network Rail said the railway was designed for a temperate climate and is ‘challenged’ by prolonged periods of high and low temperatures, storms and floods.

It added: ‘Our climate is changing and we’re seeing more and more of these types of incidents.

‘We are acutely aware they must be addressed and we have drawn up comprehensive plans to do so.

‘There is no quick fix but we will continue to review the way the railway operates in extreme weather and build resilience into all of our plans.’