When American artist and filmmaker Doug Aitken visited Tasmania in June 2019 he shared with an exclusive group of industry players his vision for the Project X Green Lens art installation in the South Ida Bay State Reserve, the site of the now dormant Ida Bay Railway.

The details of what Green Lens was to be remain confidential, as is the MONA way.

Green Lens is no longer. It is now called Transformer as pictured.

“Green Lens transitioned into Transformer. As we worked through the process it became clear some hurdles were too high to jump for Green Lens.

We didn’t feel comfortable proceeding so we changed course and we are very, very happy with the result. ”

“Our aim is to lodge a development application with the Huon Valley Council later this year, and pending approvals we plan to open in December 2021,” Carmichael said.

Almost from the moment the site location was announced in mid-June there have been rumblings about a Saffire Freycinet style accommodation development in the far south of Tasmania.

When TT inquired with Carmichael about MONA’s plans to establish high class accommodation in the vicinity of the Project X installation he said: “Mona doesn’t have any plans to develop accommodation at this stage.”

“Our focus will be on the installation and the visitor services required to get it open as soon as possible, hopefully late next year if all runs smoothly.”

“If the visitor numbers are high – we expect there will be strong interest from other investors looking at accommodation, there is clearly a shortage of options in the area. We don’t expect this interest eventuating until Transformer has proved itself as a draw card,” said Carmichael. 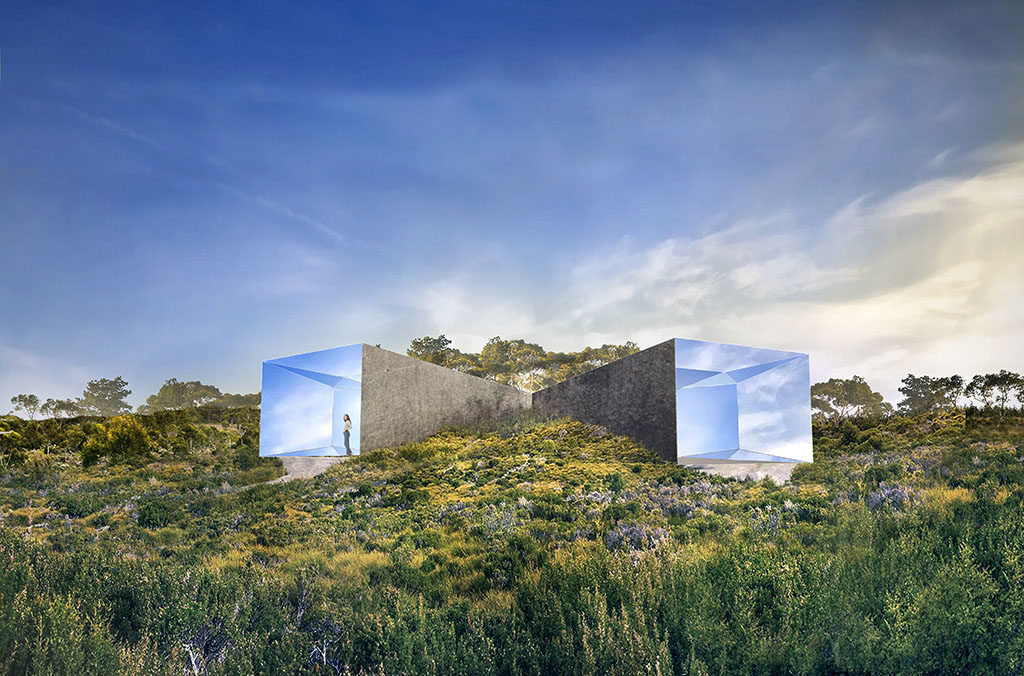 Out of the original $2 million dollars in government grants which were urgently provided to increase much-needed tourism into southern Tasmania following the February 2019 bushfires, there is reportedly still $1.5m in the MONA saddle bags to spend as they see fit.

Carmichael explained back in June: “The money (grant) was given to DarkLab for Project X. Nothing to do with Council, they supported the application to the federal government, but they have no control or responsibility for the deed, it’s a DarkLab project wholly.”

“We report to the Feds. It’s our decision as to how we spend the money based on objectives set out in the deed around visitation. The federal government sign off before we proceed. We’ve put forward five projects. Two have been completed, two weren’t approved and one is still being worked on.”

“We are highly confident that Transformer will provide long term benefits to the region,” he said.

When asked about how the plans for the The Ida Bay Railway will fit into the site, Carmichael continued:

“Our plans won’t impede the Ida Bay Railway from operating again. It will most likely provide the Preservation Society with a renewed interest in the site.

However, our research indicates a huge sum of money is required to operate the train and restore the track and rolling stock which is not something we have an interest in doing ourselves. If the society is able to raise the money it would be great to see the train running again, and we’ll be able to share visitor services (parking, toilets etc). It looks like a huge task though.”

At the request of the The Ida Bay Railway Preservation Society (IBRPS), the Minister for Environment and Parks, Roger Jaensch visited the site of the Ida Bay Railway at Lune River 8 July 2020  and indicated that he could not see why both proposals could not be made to work in that area of the Reserve.

Doug Aitken (born 1968) is an American artist and filmmaker. Defying definitions of genre, he explores every medium, from film and installations to architectural interventions. Utilizing a wide array of artistic approaches, Aitken’s immersive works lead us into a world where time, space, and memory are fluid concepts. His work has been featured in exhibitions around the world, in such institutions as the Whitney Museum of American Art, The Museum of Modern Art, the Vienna Secession, the Serpentine Gallery in London, and the Centre Georges Pompidou in Paris. Aitken earned the International Prize at the Venice Biennale for the installation electric earth, the 2012 Nam June Paik Art Center Prize, and the 2013 Smithsonian American Ingenuity Award: Visual Arts. www.dougaitkenworkshop.com

The outback town of Wyandra is easily passed by, blink and you’ll miss it.

Town postie Glenn Paterson has set about changing that, creating a place that travellers want to stop at on their journey along the Matilda Way.

Established as a settlement on Queensland’s historic Western Railway Line, the proximity to the Warrego River made the town a vital part of the now-suspended line.

It provided water supplies for freight moving up and down the rail network, located just off the Mitchell Highway between Cunnamulla and Charleville, over 800 kilometres west of Brisbane.

But once a thriving hub for the graziers of the district, Wyandra has seen its population recede below 100.

Even so, and going against the trend of moving away from the outback to the coast, Mr Paterson reversed that and headed west after a “three-line scatter ad” in his local paper.

When he brought the Wyandra Post Office there was not much else there.

Mr Paterson has transformed the post office and adjacent block into an outback attraction for anyone passing through.

“You couldn’t even by an ice cream or a drink. There was nothing else,” Mr Paterson said.

“I converted the shop doing Devonshire teas and burgers and then it just grew.

“Just made it a good place to come, and it’s a real tourist facility now.”

Using locally sourced Australiana relics, the grounds now offer a view of life in the bush from a bygone era.

The town’s old fuel depot sits on the site and its 44-gallon drums have been replaced by old fashioned-style cinema seating.

The former utility has been transformed into a picture theatre where patrons’ sense of nostalgia is whipped up by running old black and white newsreels and classic movies.

“That’s what you used to do, you’d go to the movies and sit there and watch the black and white news reels, Movietone,” he said.

“They just love it, it brings them back to the past.

“We even ran Jaffas, like in the old days, to roll down the isles.”

Lock up the grey nomads

Four years ago, Mr Paterson also purchased and moved the old town jail onto the grounds.

“That was built in 1909 and it’s always served as the local jail behind the police station,” Mr Paterson said.

“Sometimes when they [grey nomads] get a bit rowdy we threaten to put them in the jail pyjamas and lock them in overnight.”

The 600km round trip mail run is done on Tuesday and Friday which has kept Mr Paterson and his newly wed wife Roscia busy.

But with travel restrictions in the country still limited, he has never seen the highway so quiet.

“With the COVID we’ve got no tourists around, there’s nothing on the highway, we are more or less isolated,” Mr Paterson said.

“Hopefully they’ll end up coming [back] this way.”

Thankfully for tourist operators, intrastate travel restrictions have been lifted with half of the traditional outback tourist season still ahead.

The roadmap to lifted restrictions nationwide is still a work in progress but hopefully will be next month.

Mr Paterson has a simple message for anyone thinking about a trip to the outback.

“It’s a lovely place come on out and see us,” he said.

As an example of adjustment and transformation in these times Grosvenor Hotel in St Kilda is operating as a providore. With the pub and bistro forced to close in line with government rulings, its bottle shop, Grosvenor Cellars, has taken centre stage and become the new hub for customers. As well as selling alcohol, the bottle shop is adding four new streams to its business: Premium fresh meat cuts, cheaper than supermarkets and other gourmet offerings.

The Grosvenor has always been known as a meat specialist, serving up delicious meals in its bar and bistro. Now, it’s becoming a boutique butcher too, offering premium quality export grade cuts. As an associated company of Australian Meat Group, it has wholesale access to quality, grass fed, Gippsland farmed meat, and can pass this onto customers at cheaper prices than supermarkets.

Alongside the bread, customers can pick up gourmet grocery items like pasta, rice, cheeses and sauces, giving locals a chance to support independent businesses instead of going to the major supermarkets.

Cook-at-home meals are also a feature. To take the work out of shopping and cooking, the Grosvenor is also offering ready made meals prepared by hatted chef Simon Moss, which give customers everything they need to cook or reheat at home. Changing daily, they have so far included a home parma kit, which comes pre-packed with crumbed 2 schnitzel, cheese, ham and Napoli sauce; a heat-and-serve risotto range with a small batch of housemade vegie stock to finish the cooking off at home; and a par-baked pizza to give locals the chance to cook a classic Grosvenor pizza at home.

The meals change frequently and can be ordered online or by phone and collected from the bottle shop at any time, delivery is available after 5pm.

Bar and bistro menu available as takeaway While the restaurant may be temporarily closed for the foreseeable future, customers can still enjoy the hotel’s full menu, again prepared by hatted chef, Simon Moss. Orders can be collected at the bottle shop, or home delivered. Include some wine with your meal, and orders over $100 are delivered free!

For Manager Frank Chilelli, the changes are big, but the essence of the Grosvenor remains the same. “We’ve always been about providing quality food and wine to our customers,” he said. “Now, we’re just doing it in a new way.” But it’s not just about looking after his customers. Part of the reason behind the changes were to keep his staff employed, many of whom are breadwinners for their families. “Our priorities are to keep the people we have employed, and keep morale up during these difficult times. I urge people to support local, and buy local as by doing this you are keeping people and their families in business and hopefully, the economy more buoyant. Consider where your money is going when you’re spending, because by supporting local businesses like ours, you’re also supporting the backbone of the Australian economy at a time we all need it the most.”