Independent truck drivers parked their big rigs along the road in Washington, D.C., in protest, calling for the president to make trucking great again. According to reports, self-employed truckers staged demonstrations in the nation’s capital and a slew of other states on Friday in what they called the ‘May Day’ protest.

“We’re calling this May Day, ‘Mayday, mayday, mayday,’” said Disrespected Trucker Founder Shawn McIntosh. “This is a call to arms for all the truckers, we got a problem out here.”

Front line workers, who are keeping the supply chain going amid the pandemic, have urged Congress to enact laws to protect their pay against brokers, who they claimed are gouging the system.

“It’s outrageous. We’re just small carriers that is trying to make it and ensure that we can make money just to survive. Then you turn around and, you know, you got guys out here that are gouging the system. I’m sure that the federal government is giving the guys the work, are giving them the money to do whatever needs to be done, and then they are sticking it to the average Joe out here.” – Unnamed protester 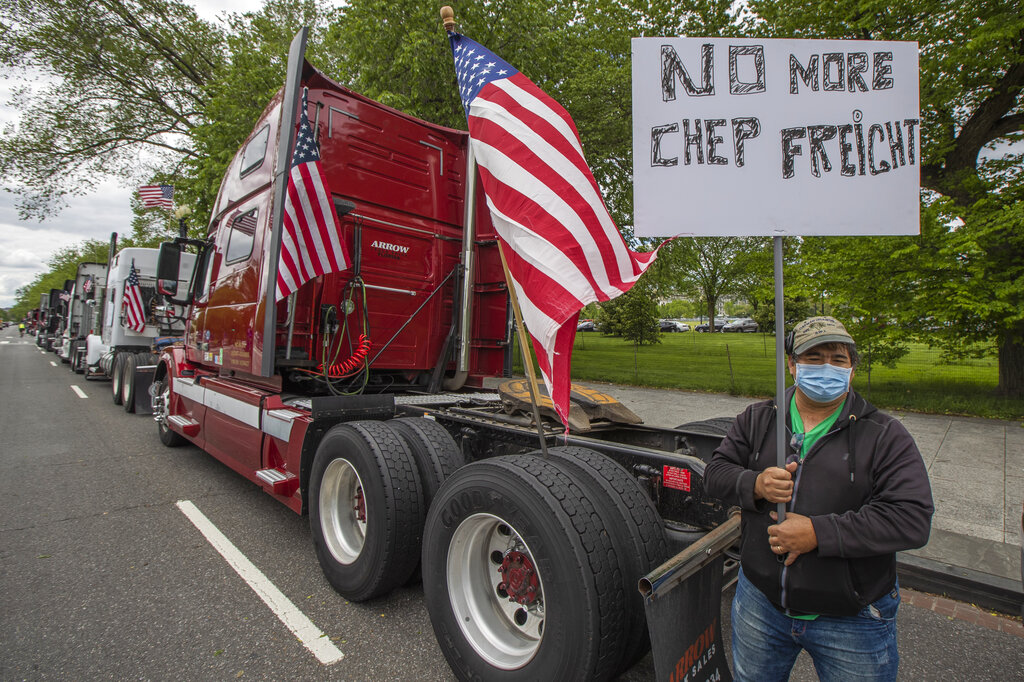 The organizer of the event, Shawn Mcintosh, stated that drivers are growing weary of social distancing orders while on the road for days, sometimes weeks, at a time. According to him, coronavirus lockdowns have restricted dine-in access at restaurants and limited bathrooms opportunities.

Drivers have also been told they cannot remain in their trucks during the loading and unloading process, but they have nowhere else to go.

“We need to have access to a break room, like their employees, where we can go, sit down, get a soda pop out of the machine and wait, not sit on a bench in a cage,” added McIntosh. “There’s guys that are sitting in a cage on a bench to wait for their load to be loaded (up to) three hours, they don’t let you back in your truck.”

Moving forward, independent truckers are urging lawmakers to create federal laws to protect against the transportation of cargo at unfair prices, in addition to a cap on the brokers’ cut of their pay.

“We’re going to let President Trump know that we’re here, we’re not moving,” said one protester. “We want our fair share, and we need laws to protect these drivers.”