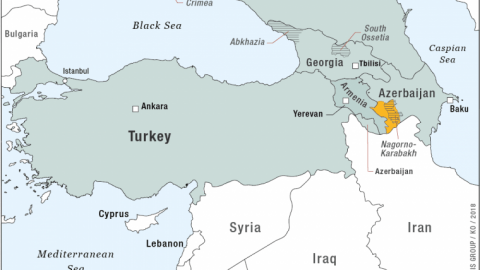 The conflict between Azerbaijan and Armenia has become increasingly serious. Both countries claim the territory of Nagorno-Karabakh and between the late 1980s and early 1990s there was a war between them to decide the control of the region. Tens of thousands of people died in the conflict, which ended in 1994 with a ceasefire agreement, without a winner. The agreement places the Nagorno-Karabakh region as a de facto autonomous republic, remaining de jure as part of Azerbaijan. This agreement gave a break in the massacres but did not prevent the continuation of the territorial disputes between both countries, which until today claim the region, and the situation has worsened even more recently.

On July 12, there was an armed clash in the region, with an uncertain number of victims. Azerbaijani forces accuse Armenia of violating territorial limits. In contrast, the Armenian government blames the opposing country for such violations. Since then, according to Armenian observers, bombings on the border have been reported every 15 to 20 minutes. Data on the dead or injured people remain uncertain.

Armenian Prime Minister Nikol Pashinyan accuses Azerbaijan of initiating hostilities and says that no violence will go unpunished, promising to react to every move by the enemy country. Data from the Armenian Ministry of Defense points to records of artillery attacks against Armenian territory in the early hours of July 12, when the fighting was recorded. According to the Armenian government, Armenian troops only retaliated against the attacks received. Pashinyan accuses not only Azerbaijan, but also Turkey of involvement in the attacks.

The charges are not unfounded. Turkey has shown support for Azerbaijan in the dispute, encouraging annexation and not a peaceful resolution of the impasse. The day after the clashes at the border, the Turkish foreign minister, Mevlut Cavusoglu, spoke in defense of Azerbaijan, saying that this country “is not alone” in the conflict. The statement becomes controversial and dangerous amid an escalation of violence, as it connotes not only support from Ankara, but also an interest in intervening in the conflict. Armenia reacted with severe criticism, blaming Ankara for the return of the violence. According to the Armenian government, Turkey has an interest in destabilizing peace in the region to gain greater control and influence over neighboring territories.

In return, the European Union issued a public note calling on both parties to reduce violence and to avoid the use of force. Likewise, the US State Department classified violence in the region as unacceptable and urged both parties to seek a peaceful solution to the dispute. In the same vein, the Russian government has called on both countries for a peaceful resolution, without showing support for either party. Foreign Minister Sergey Lavrov urged Armenia and Azerbaijan to an immediate ceasefire and to comply with the terms of the Minsk Group, a committee created in 1992 to manage peace in the region. Since both countries are former Soviet republics, the role of Russian diplomacy in managing the conflict is essential, due to the weight of its influence in the region.

It is important to note the difference in the approach of the Russians, Americans and Europeans to the Turkish stance to the crisis. Demonstrating open support for any party in the current phase of the conflict can be crucial to intensify disputes and encourage an increase in violence. Being Turkey a military potency, the declared support in a conflict in its early stages may encourage the progress of hostilities. In this sense, it is likely that Azerbaijan, with the support of Ankara and possible Turkish intervention, will continue the bombing, assuming strategic advantage and superiority over its opponent. This is the great danger behind the Turkish pronouncement.

The situation, however, must be analyzed in a complete context. Turkey has shown interest in increasing its regional and international geopolitical relevance and, for this purpose, it has called for bold and provocative acts, such as, for example, its role in the Syrian War and the recent conversion of Hagia Sophia into a mosque, which provoked outcries all over the world for being an unnecessary attack on the memory of Greek Christianity, provoking the resurgence of religious tensions in the region that had not existed for a long time.

In fact, Erdogan has clear plans to constitute a neo-Ottoman geopolitical projection, regaining power and influence at a regional level throughout the territory where the Ottoman Empire, predecessor of the modern Turkish state, operated in the past. Relations between Turks and Armenians, in this sense, do not have a good record and are alive in Armenian memory with the ethnic-religious genocide perpetrated against Christian Armenians in the early 20th century.

In this sense, Turkish interest in creating an area of ​​instability that favors its regional influence can be costly. Russia, as the regional power with the greatest historical influence in the Caucasus, must counterbalance Turkish advances through diplomacy, while Erdogan must be internationally pressured to avoid any intervention in the dispute between neighboring countries.